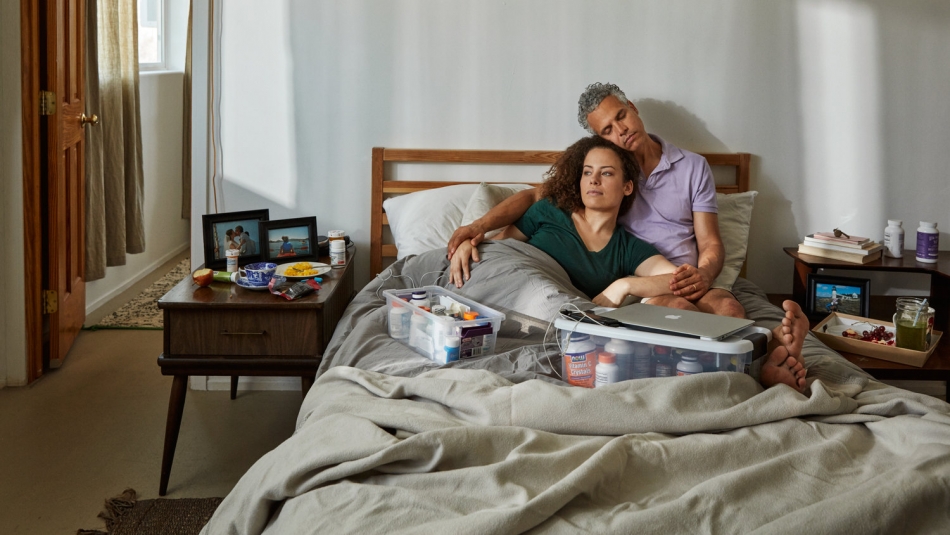 Premiering last year at Sundance Film Festival, director Jennifer Brea’s documentary Unrest portrays her affliction with myalgic encephalomyelitis (ME) in a humanistic and intimate light. More commonly known as chronic fatigue syndrome (CFS), Brea’s lifestyle prior to her illness was a life unrestrained as she traveled across the globe with her husband, Omar Wasow, whom she met while they were both PhD students at Harvard. Recording her illness at its onset in 2011 enables her audience to see what it truly looks like behind closed doors, as well as the confusion she faced from a multitude of doctors often suggesting that her ongoing symptoms were a matter of repressed psychological trauma or simply “all in her head”. After recovering from a high fever one day, Brea now repeatedly endured numbness, muscle spasms, acute sensitivity to sounds and light and often loses her ability to walk, rendering her bed-ridden for the majority of her waking life. Unrest provides a voice to Brea’s newfound physical struggles and her perspective on what makes a life worth living as well as provides insight from a host of other CFS patients around the world and their individual conflicts they face headstrong on a daily basis.

Often cited in humor, chronic fatigue syndrome is a vastly different realm compared to just feeling drowsy or not up to going to work in the morning. Brea’s home-recording of her varying symptoms seem to strike on the best of days and on the worst of days, often leaving her with the inability to talk or walk up the stairs in the comfort of her home. “It’s like someone turned the lights off”, the darkness of CFS continuing to hover over her with the medical community still to this day uncertain as to how individuals acquire this chronic illness and have yet to discover a cure for it. Brea bares her soul, sharing her fears and hopes for the future as well as the strains and unconditional love she radiates together with her husband. With her mind as her constant companion, Brea’s immobility teaches us a universal lesson in that having an unrelenting and brilliantly fierce attitude gets us much further in life than simply having two feet to walk on.

Conducting interviews from her laptop, Brea speaks with professionals, patients and their families only to realize the stigma she faces are not so different from those in other parts of the world. In Denmark, CFS patient Karina Hansen was taken from her home and essentially held hostage to receive psychiatric treatment (with no successful results), much to the despair of her parents who went without the ability to see her for three years. “There’s no one coming to look for me because no one even knows that I went missing” echoes a sentiment that grips these patients with a chronic illness that is often denied or deemed invisible in our public lives, yet affects one million individuals in the United States alone. Brea’s strength in connecting communities provides not only a platform for action to CFS patients who may feel lost in the margins, but also provides a story for the rest of us to listen to and to advocate for, ultimately in the hopes of creating a stronger, collective voice.