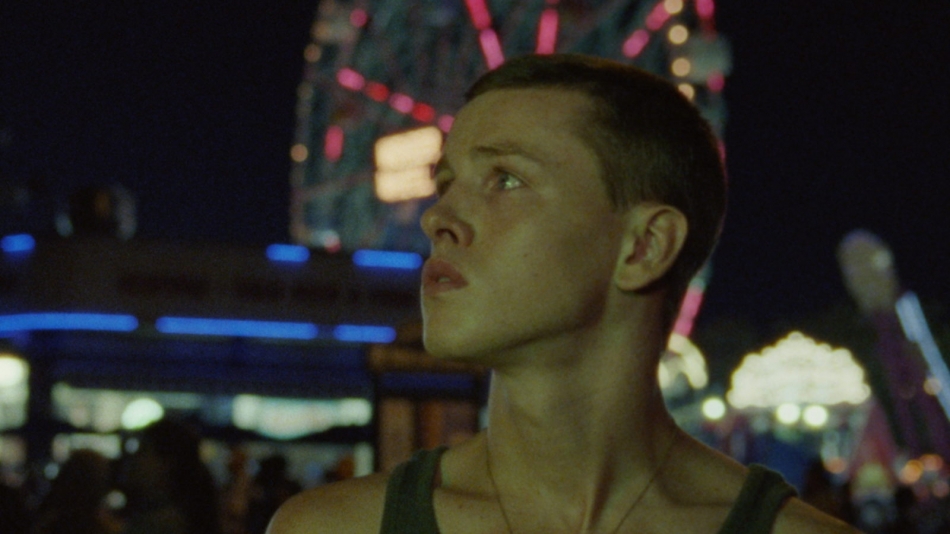 Beach Rats pries open the world of arcade-filled boardwalks and grimy sandscapes of Coney Island along with the concealed identity of Frankie (casting Harris Dickinson in his feature debut), an alpha-teenager in his working-class group of boys grappling with his sexuality. Cruising gay chat rooms in the isolation of his family’s basement, Frankie’s curiosity in older men is stifled by his uncertainty about what it is that he’s actually looking for. Upon meeting a girl his age, Simone (Madeline Weinstein), along the boardwalk eager for his attention and affections one night, our protagonist turns hot and cold juggling a quasi-relationship with her as a means of dodging questions from his family and friends as he struggles along his unraveling path of sexual self-discovery.

Director Eliza Hittman’s sophomore film paints a cinematic picture of adolescent passivity in the face of constant hyper-sexualization and gender stereotypes. After bringing Simone home for the first time, his mother immediately assumes that they’re in a relationship and his friends relentless questioning forces him to keep up good appearances with her. Simone’s version of what she deems romantic goes over Frankie’s head while his perspective of what makes a memorable first date palpably miss the mark. In a sly attempt to pick Simone’s brain about her views on heterosexuality and homosexuality, her immediate response is that the girls making out with other girls is hot, while guys making out with other guys “is just gay”. With his father dying of cancer, Frankie confiscates pills and various drugs to numb him from the pain and uncertainty that bombards him from his day to day life. When questioned why he goes for older guys, Frankie responds that they won’t know anyone that he knows, a quest for an anonymous identity that inevitably only seems to cause more fear and shame within.

Beach Rats keeps its dialogue to a minimum, expressing intimacy and vulnerability with subtle gestures between Frankie and his male and female partners. Frankie’s reluctance to reveal his inner workings are shown in front of his webcam, albeit with him lurking in the shadows and a cap hiding the contours of his face. Hélène Louvart’s cinematography succeeds in letting the viewer peer and observe from up-close yet never truly revealing its characters in any complete manner, embracing the mood and atmospheric tensions that underlie Frankie’s sexual exploits. The consistent waves lapping at the shore, the burst of fireworks in the air and the bustling commotion from the boardwalk sets the soundtrack for the film, a seemingly romantic notion of what could be but eventually remains isolating given Frankie’s ambiguity in revealing his underlying desires as well as a moral judgement turned somber on the beach. Hittman’s work penetrates those often concealed adolescent afflictions in a beautiful and poetic form, rendering itself captivating and worthy of reflection in its memorable force.