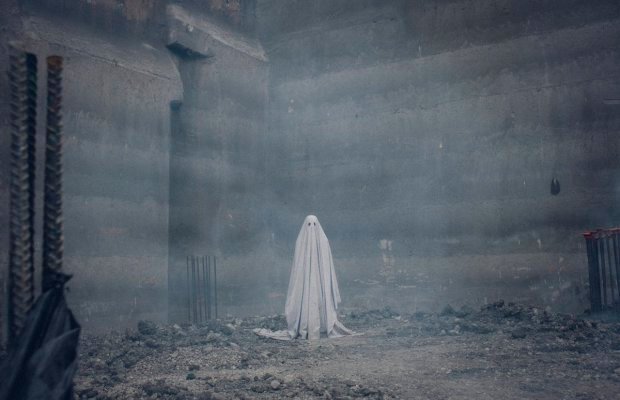 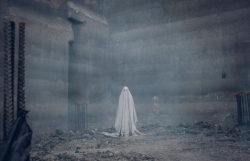 Reverting back to his indie roots from box office studio projects, director David Lowery’s drama A Ghost Story is an earnest exploration on the inevitability of change and on humanity’s incessant will to leave their legacy. The majority of the film takes place in a single house where we’re introduced to married couple, C (Casey Affleck) and M (Rooney Mara). After a haunting premonition, C dies in a car accident and turns into a ghost-figure (meandering with a white sheet draped over him and complete with two black cut out holes for eyes) that passively watches his grieving M from a distance. Instilling a looping time sequence, Lowery’s film moves from observing the very present space between living and deceased lovers, to the swift sequential moments connecting the past and future with haunting, existential undertones embracing what it means to be alive.

Filmed in a squared aspect ratio, A Ghost Story conjures up nostalgic spirits like rediscovered memories of old home video tapes hidden away in a dusty attic. Providing little in the way of dialogue, the viewer is left to interpret the grievances of not only M in her isolation after her husband’s passing, but also of C in his silent, drifting gaze. For the majority of the film C is rendered to a confined state and space, yet we infer his thoughts and feelings intensely as his presence adds an additional element of observance outside of the camera’s lens. A distraught and silent four-minute scene of M consuming a homemade pie lingers on the very real passage of time, but just as quickly our sense of time begins to unravel as our awareness of the repeated patterns and routines of M’s life take place in the blink of an eye. The film moves full circle from the house’s familiar plot of land to its destruction and inevitable creation of futuristic condos before looping back to a past before the house was ever built. “We’ve got history”, C laments to M, explaining his resistance to leaving their home. Yet history doesn’t tie itself down to any physical space as even the tangible familiarity we associate history with inevitably changes and renders itself unrecognizable with time.

Often chilling and dissonant, Daniel Hart’s instrumental explorations lend mystery and open ended answers to the film’s underlying existential questioning. The little that we’re shown between C and M’s relationship centers around C’s resistance to communicate shared responsibility and decisions, gravitating inwards towards silence. The one form of communication he does feel at ease with comes in aural form, answering a lingering question of M’s by placing headphones on her ears with a track he’s been working on. Perhaps communicating through music opens a greater territory than words, adding a creative dimension of interpretation in the moods and memories that music evokes within us. During one dinner party that takes place in the house after M has left, a guest goes off on a tangent about the inevitability of science demolishing humanity from existence as we know it, yet despite this acknowledgement “you do what you can do to make sure people remember you after you’re gone”.  Whether in tangible form like the written notes M leaves in the narrow crevices of houses she eventually departs from or as an ethereal creation like music, A Ghost Story asserts itself as an extraordinary piece of work attributed to David Lowery’s grasp on humanity’s inherent nature to leave behind a part of their identity, if only to connect and touch one other person’s life, long after our physical bodies have perished.