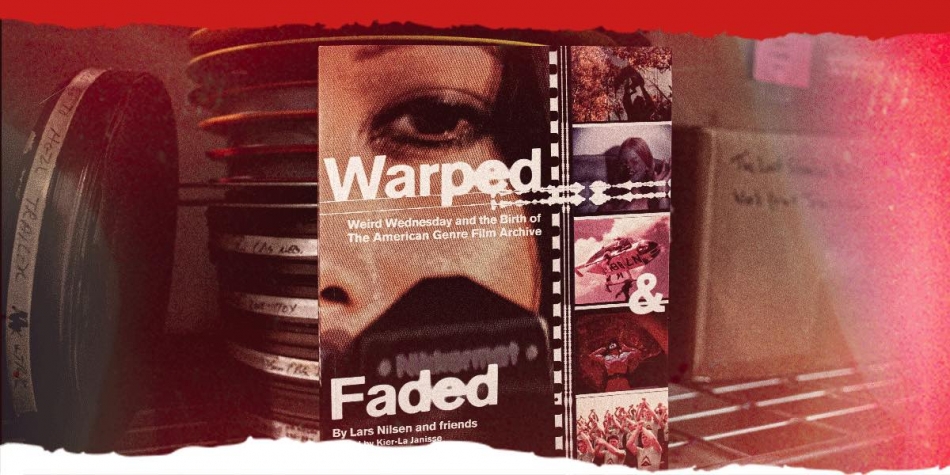 Get yer fistfuls of genre films and underground cinema here! In this volume of Warped and Faded: Weird Wednesday and the Birth of the American Genre Film Archive, we have the oral history of Austin-based cinema monolith Alamo Drafthouse and its beginnings as a beacon for genre film freaks with its weekly Weird Wednesday midnight movie raves. Not only that, but more significantly we are also gifted with a compendium of the strangest and most criminally under-appreciated films of the second-half of the 20th century. With titles such as The Sinful Dwarf, Truck Turner, Mad Dog Morgan, Skatetown U.S.A., Magic Christmas Tree, Night Warning and Bring Me the Head of Alfredo Garcia essayed in these kaleidoscopic, 70’s neon-festooned pages (designed by, no-joke, someone with the name of Luke Insect), you’re presented with an alternate perspective on film history and all of the lovely sex, drugs, and depravity that we could ever hope to take a gaze into.The collection of otherworldly NSFW horror and sex film posters across these pages is alone worth the price of admission.

In this 400-page glossy, lysergic tomb, former Weird Wednesday host and film archivist Lars Nilsen (and fellow Alamo Drafthouse affiliates and friends) bring us back to the last days of old Weird Austin, starting with an oral history detailing how a group of rabid collectors of decaying drive-in and grindhouse films started a community that eventually changed the way we experience going to the movies and how we think and talk about them. Contemporary movie geekdom, including how fanboys talk about corporate titan Marvel/Disney products, also unfortunately has much of its seeds here in this history. But if I had to guess what Nilsen’s main purpose here is, it would be to fully archive his beloved 60's to 80's underground cinema as well as tell the story of all the obsessive archivists that made this phantasmagorical playground of images possible.

The stories are told by outcast film scholars and true believers who understand the margins of society and what these strange films speak to. With descriptions of films such as Vice Squad and Toys Are Not for Children in the compendium section (mostly written by Nilsen with the occasional review by Drafthouse founder Tim League), the often hilarious essays vividly display the enthusiasm and genuine love these maniacs have for these films. The book ends with some lovely tributes in a Weird Wednesday Hall of Fame to forgotten stars and geniuses such as John Carradine, Henry Silva, Claudia Jennings, Stephanie Rothman, John Saxon, Jamaa Fanaka, Susan Tyrrell, and Joe Sarno. By the end of the book you realize the point is not to laugh at these films and gawk at the freaks, you’re supposed to laugh with them and their singular slices of life that you’re not likely to see at the local cinema anytime soon. If you weren’t lucky enough as I was to attend some of these freewheeling midnight movie series in their 2001-2013 heyday, this is as close to the feeling you’re going to get without the shocked and awed audience reactions. What we finally have here in Warped and Faded is an archive of almost lost art for the ages. It’s probably not ever going to get this kind of weird again. More of this, please!