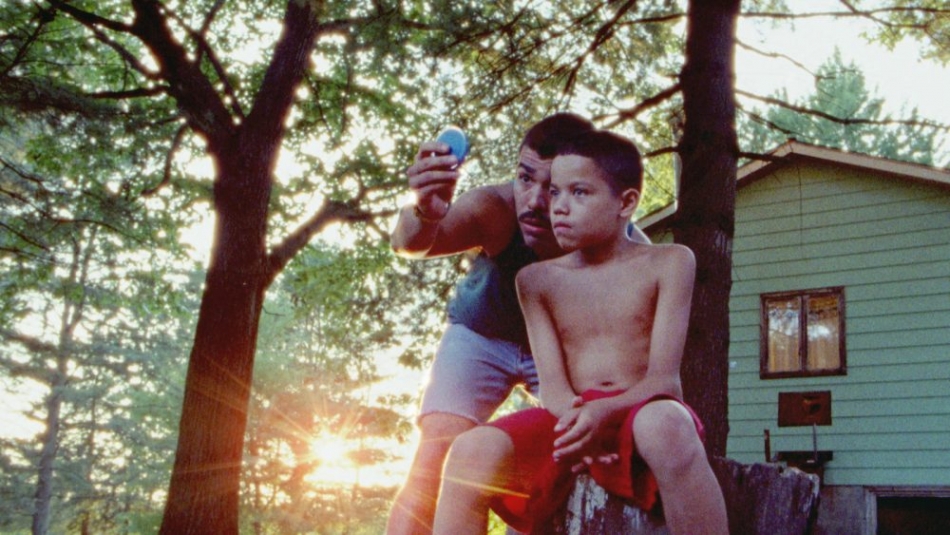 Director Jeremiah Zagar strays from heavy-handed dialogue and instead brings to life the expression of raw sensation in his first full-length feature film, We the Animals. Based on a short memoir by writer Justin Torres, the film is narrated and seen through the eyes of  ten year old Jonah (Evan Rosado) as he precariously observes and navigates the world around him. Getting pregnant shortly after her 14th birthday, his Ma (Sheila Vand) and father, affectionately referred to as Paps (Raúl Castillo), work dead end jobs struggling to make ends meet and can't seem to get out of their emotionally and physically abusive cycle. Relying on his elder siblings Joel (Josiah Gabriel) and Manny (Isaiah Kristian), the three brothers cast themselves as one as they delve through various means of escapism and finding joy in simplicity. Utilizing interspersed and brief sketch-animations, Zagar's We the Animals instills elements of childhood fantasy to help paint a realistic portrait of siblings navigating their way through boyhood.

Set in the 90's in upstate New York, Zagar's minimal use of landmarks, ambient soundtrack and 16mm film aids in his picture feeling timeless and its intimacy relatable as Jonah traverses and navigates through youth. Instilling close-ups of character's expressions, whether from Jonah's contentment of creating art under his bed at night when no one's watching, or from his mother's stunned realization looking at herself in the mirror after a particularly brutal argument with his father, Zagar speaks more through visual poetry than he does through words. His Paps' answer to most in life is through blunt means and harsh discipline. "How else are you gonna learn?", as he abandons Jonah and leaves him stranded in the middle of a lake without providing guidance on the rudimentary lessons of swimming. This memory along with his parents' intense screaming matches and reckless fighting stays ingrained as flashbacks, fueling the young boy's vulnerability with a greater desire to escape. Being the youngest of the three, he often poses as the bystander in situations that fare new to him while his brothers' boisterousness as they come into adolescence penetrate the silence.

Where Jonah lives, he isn't accustomed to seeing others like him. Playing make-believe with his Paps and dreaming of another life in Spain with his Ma, the boys are void of other role models, choices and freedom. After a bad stint at work, causing him to lose his job and having his recently bought truck break down, his father adheres to the notion of never being able to break free of his situation. Whether caught up in the rough cycles of poverty, discrimination or spousal abuse, Jonah and his siblings are simultaneously learning who they are to become while also finding themselves inching towards the footsteps of their parents' mistakes. Watching out the window one afternoon as their father persists in digging a deep trench in their backyard, Joel and Manny are convinced that it's a grave for their father. Yet Jonah finds solace laying in the murky underground, not as a means of finality but as a solitary place of magic and freedom. Less of a startling statement piece, We the Animals remains a subtly captivating and artistic portrayal of uncovering a child's coming of age journey in a society that rattles against him while jointly reminding us how remarkable and impenetrable a siblings' bond can be.