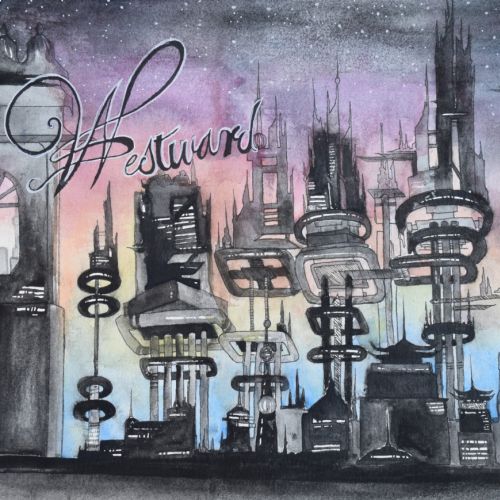 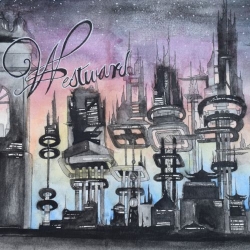 Salt Lake City, Utah-based alternative/progressive rock band Westward takes its self-described “cowboy space rock” to a new level on its latest album, The Empire of Deception.  The full-length came out in mid-October and it rides along with dynamic to reflective, Muse-like (and similar power rock bands) numbers graced by guitarist and vocalist Andrew Marshall’s dramatic, soaring, Matt Bellamy-esque vocals.

Marshall is joined by Karl Grimm on bass and back-up vocals and Matt Morrison on drums.  They combine energetic stadium rock (booming, shout-along choruses, bold guitar riffs, and emphatic drum hits) with more complex prog-rock patterns and synths touches, topped off with Marshall’s emotive to airily imploring vocals.  This is what Muse should have sounded like on its last album Drones!

The alternately bleak, bittersweet, and hopeful lyrics are placed center stage on Westward’s songs, with clear, and clearly sung, messages that tackle the state of the world and the individual in today’s divisive and destructive socio-political climate.

The sparkling synths cascades, ominous bass undertow, and sharp drum strikes of “Empire of Deception” opens the album.  Marshall cries out passionately to, “Ignite the fire / burn down this empire of deception / …founded on absolute corruption.” “Machines” gallops along with the reckless, potent feel of Muse’s “Knights of Cydonia”.  Marshall and Grimm drop Queen-like harmonies on the powerful track “Redemption”, bemoaning the fact that, “…we’ve arrived at the edge of civilization.”

Marshall mixes in some spoken word and French phrases, as well as the occasional heavy metal scream, on the wild “Risk Factor 5”.  He then gets positively operatic on the back half of the sweeping and bold “Defiance”, proclaiming, “Don’t be afraid.”  Album-ender “Fall From The Sky” is a stripped down, spellbinding one-off featuring only Marshall’s sweet vocals and glistening acoustic guitar notes.