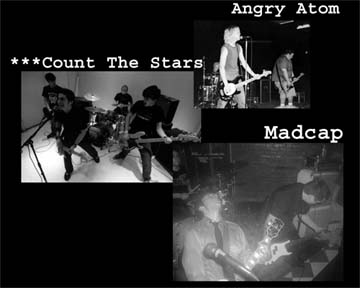 The Quest (Ascot Room) in MN

Over all, this show was pretty eventful. New bands I haven't seen before and old favorites like Angry Atom put on a great show and it was fun to say the least.

-A little blood, a little guts, and damn good time!

The first band to play was newly signed Victory Records Albany, NY rock band: Count The Stars. They're a group of four young guys who have set out to accomplish two things: 1.) Play some good ol' Rock and Roll and 2.) Have as much fun as possible while doing it.

Their live show is incredibly energetic. I found myself laughing often at all the many antics they displayed while on stage -my personal favorite: Clark's rendition of the duck walk. The band is very into audience participation and made sure everyone was having fun.

Not only is Count The Stars fun to watch but they can play well live also. These guys, although they just want to have fun, they are pretty dedicated musicians and they're good at what they do. They've all got an obvious amount of talent and work hard to prove that at their shows.

They played quite a few songs, two of which stuck out to me: "Better Off Alone" and "Taking It All Back". Once you hear "Taking it all Back", it sticks in your head and won't let you forget it. Much like many of Count The Stars' songs, it's pretty catchy and up beat...basically, it's hit-material and the audience clearly approved.

What I like most about this band is their attitude. Now, I know it's not usual to see something about attitude in a music review but it's worthy of being mentioned of Count The Stars. They are so clearly grateful to their fans and to just anyone who comes out to see a show they play at. These guys deserve everything they get in this industry; they've definitely worked for this and are still working to make their music known to as many people as possible.

Check out Count The Stars at www.countthestars.com or pick up their new cd "Never Be Taken Alive" it hits stores: February, 25th.

The next band up was one of my long time favorites, Angry Atom. Currently, Angry Atom is not signed, they have however, independently released their own cd "Four Years to No Where". They are a three-piece band lead by Micah Lother (on bass and lead vox.), BJ Lother (on guitar and vox.) and Phil Pearson (on drums). There's no doubt that this nice group of guys posses a great deal of talent and it shows, especially in songs like "Time After Time" and "Where do I Go". And it shines through, all their hard work and dedication to their music, which seems to be their lives-as it should be. When they play "Time After Time" at their shows the crowd just eats it up, everyone really gets into it. Almost every person in that crowd knows the words to every song.

These guys have a lot of love for their fans too, their songs are written from the heart and one such song was dedicated to a fan during the show who had recently lost his father. It's awesome to see these guys connecting to their fans like this. They never cease to put on a great show at any event.

The highlight of their set was definitely delivered on be-half of Micah. During one song while playing his bass, he looks down after having felt something sort of sticky between his fingers, turns out it was blood. It was practically gushing from his fingers! Oh, but Micah, he just keeps on playing like nothing had happened. Of course the audience greatly appreciated such "sacrifices" for the sake of a good show and went crazy screaming for him! By the end of it, at least a six inch area on his 4 strings was covered in blood. One fan requested the bloody pic and gladly placed it in a bag then into his pocket. That was just crazy to me...and of course I offered to buy it! That's history to me man!

Just goes to show what an awesome job these guys do on stage. People, who may not have known of Angry Atom before the show began, either leave with a CD or an Angry Atom song repeating in their head and no one forgets them.

Check out Angry Atom at www.angryatom.com listen to a few MP3's or just go ahead and buy a CD. Their second cd is to come out some time in the spring or summer. If you ever get a chance to see these guys, I highly suggest you take it! They always give kids a show worth the money.

Madcap headlined for this show, though I expected a bit more stage presence, they gave us a pretty ok show. Nothing too amazing just a good old rock show. What little bit of a mosh-pit we had moving was taking off during Madcap's set, as it should be for a headlining punk band. -I would like to see how these guys do in front of a larger crowd of more dedicated fans, maybe they'd be more into what's going on… All the same, the audience seemed to be having a great time, the crowd knew the words and there were random fists being thrown to the ceiling in approval of the performance.

Their set was comprised mostly of songs from the new CD "East to West", which will also be featured soon in a review (by yours truly) here at www.rebelnoise.com in the CD review section. There were a few songs that I liked without having heard the CD first. Those were "These Old Feelings" (not as cheesy as it may sound) featured on the 02' Warped Tour compilation CD, and "Bright Lights, Big City". They are catchy and fun to listen to.

Basically I suppose I was somewhat bored with their live-show. However, many other people I asked much-preferred Madcap over Count The Stars. It's a matter of preference I'm sure.

You can check out Madcap at www.madcappunx.com. Their CD "East to West" is available there. Also, they are set to be on Warped Tour this year. Hopefully you get a chance to check them out for yourself -they play an ok show over all.