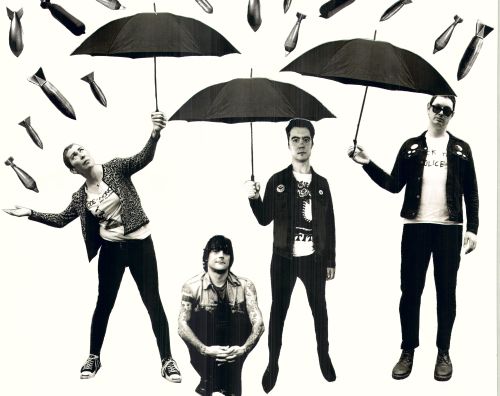 There’s no shortage of things to be worried about these days, from corrupt and destructive politicians (AKA, malignant Trump in the U.S. and his administration/enablers, and on down that line) stripping away our civil and human rights, to an uncontrolled viral pandemic that’s spreading in part by the (mainly willfully) ignorant among us who continue to congregate irresponsibly, to those who dismiss the truth, facts, science and math, and who believe the lies spewed by the malign Trump and his cronies, as well as the rise of divisive socio-political culture, superficial social media, and consumerism.

Rebel Noise is super-stoked to host the premiere of the band’s fierce and frenetic new album, Era Bleak, on the day of its release via Dirt Cult Records.

Even the group’s name, LP title, and place of residence (Portland being a major hotspot of the pandemic, protests, and unlawful unmarked ‘police’ activity condoned by Trump) sync up with the disturbing unrest found around the world.

Era Bleak’s members (Candy on vocals, Zach on guitar, Justin on bass, and Spiz on drums) explode musically and lyrically on their self-titled LP, with the Candy shouting passionately on the intense ‘80s-punk-inspired title track, “Game is rigged / ‘cause the leader’s corrupt / Don’t need no one / to tell us our luck / because everybody knows / that the world is fucked!” Pretty strong – and accurate – statement right there!

Urgent and angular post-punk guitar lines skewer the tuneful songs like sharp wires, while the potent lyrics are exclaimed with punk rock vehemence and volume.

An irate and glowering atmosphere jars each number, with hard guitars screeching and bass lines lurching through “Struggle” (“Take it all one day at a time / Survival of the fittest / is a state of mind”) and the off-kilter “Mind Control Tower” (de)tuning into a noisy frequency.

Certain tracks, like the aggressively moshing “Tinder Box” and staccato-stabs of “Burning Sky,” break out with speedily churning hardcore rhythms. A throwback ‘70s urban rock ‘n’ roll vibe radiates from “MRI,” while “Robot” romps with a fun punk-pop pace, but lashes out with vocal fury.

The churning “Opinions” contains elements of X-Ray Spex and Rollins Band as it rampages with a dangerously deep, ranging bass line and Candy fervently yelling, “We’ve all got something to say / We’ve all got nothing to say.”

Era Bleak definitely do have something to say – and play – and their new full-length is an apt volatile snapshot of, as they so succinctly put it with “Era Bleak,” our year-2020 fucked-up world.

Justin elaborates, commenting, “We aren't really touring right now cuz, duh, so this might be your best chance to get your filthy hands on a copy. And then wash those filthy hands and don a mask. Someday we'll look back and laugh, but right now this might just be a fitting soundtrack to our lives.”

Per the band’s recent Facebook post, “If you buy directly from the band by August 21st, 100% of proceeds (not "profits") will be donated to Black Resilience Fund and BLM Mutual Aid Resources (and standard shipping to our beleaguered US Postal Service)