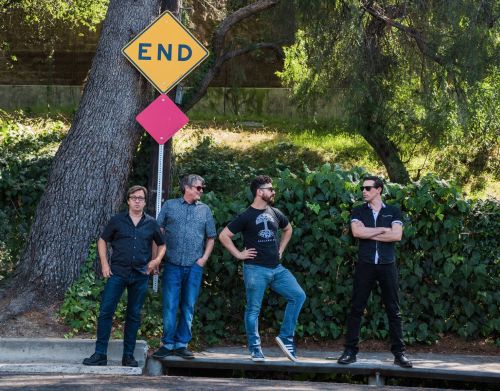 LA-based spacegaze/alt-rock band Tombstones In Their Eyes reaches for the cosmos on their stellar LP.

From the hotbed of music activity that is Los Angeles comes the latest album from four-piece Tombstones in Their Eyes. The 12-track collection’s vague-sounding title, Maybe Someday, conjures up a daydreaming mood mixed with a melancholic uncertainty about what the future holds; something that so many of us experience in our everyday lives. The LP bows on November 15th via Somewherecold Records.

Rebel Noise is totally psyched to host the premiere of Maybe Someday in its entirety a day before its official release.

As with their previous output, this Tombstones In Their Eyes album was recorded at LA’s Kitten Robot Studio under the guidance of Paul Roessler (Nina Hagen, The Deadbeats, The Screamers, 45 Grave), The cover artwork was created by Trevor Tipton, a much sought-after artist renowned for his work with The Black Angels, Primal Scream, and Levitation Festival, among others.

The band had previously released their 2-track single “Maybe Someday” with B-side “I Can't Feel It Anymore (Junkie Version)”, and “Open Skies” (also a two-track offering with an alternative version of “Dreams”).

Maybe Someday follows up on debut album Sleep Forever, which arrived in 2015, and after a string of critically acclaimed EPs (Nothing New EP, Fear EP, and 2016’s Bad Clouds EP) and “Shutting Down” single.

Tombstones In Their Eyes are known for radiating a massive wall-of-sound with their guitars and other sonorous instrumentation that is both hazy and transporting. On Maybe Someday the band have carved out cavernous, stoner rock reveries and dark shoegazer dreamscapes that at times ascend into post-rock atmospherics.

Stormy to ruminative, often within the same song, Tombstone In Their Eyes aim for the skies and also plunge into the depths. The evocative title track swirls with burnished guitars, wavering keyboard notes, and trippy extended vocals, ramping up and rippling out with deep reverberations.

John Treanor reveals, ““Maybe Someday” is a magic song! It came together quickly and I fell in love with the demo. [It] says it all, as far as the theme of the song goes. It's about yearning to break out of the self-imposed chains but knowing that it will probably never happen. So sad, really.”

Album-starter “Open Skies” kicks it all off with a panoramic-wide view of the desert/stoner/space/psychedelic rock kind, burning with smoldering guitar embers, grinding bass line, and pushing drum beats, with Treanor delivering his vocals with dazed, but determined fervor.

Spacey effects spangle the ruminative and gliding “I Want You,” while “Today” rises on lofty harmonies even when down in the dumps lyrically (“It’s another starless, joyless… day”).

Fiery guitar reverb courses through the chugging “Down In The Dirt,” as Treanor muses introspectively about the “wonders of the world.” The band take a turn towards Americana on “The Demon,” albeit with the continued use of fuzzed up guitar-work.

The gritty and doom-laden “The One” is a lugubrious beast that is leavened with a lighter, more hopefully vocal delivery. Close to a more typical catchy and direct alt-rock song, “I Believe” rings out with a clearer guitar sound at times, but is still rife with sonic and emotional turmoil.

The band stare into the abyss on the lament “I Can’t Feel It Anymore,” which features melancholic harmonies and a slowly sinking sound. The restless “Up and Down” features a lively drum beat, angular guitar lines, and smoky, but softly delivered vocals.

About the album as a whole, Treanor comments, “This set of songs still carries a bit of the sadness and depression that permeated some of our earlier stuff, but I was definitely in a better place this time around (although you may not be able to tell by the lyrics).  Less depression and catharsis; more joy. These songs do not all fit into one neat box.  We don’t use the same sounds on each song, and the songs reflect the scope of what we do.”

Maybe Someday is available on limited edition CD via Somewherecold Records: https://somewherecoldrecords.bandcamp.com/ and digitally via platforms such as iTunes: https://itunes.apple.com/us/artist/tombstones-in-their-eyes/804139781 and Spotify: https://open.spotify.com/artist/15nZziu6BOdIcHkcZdLQk5, as well as directly from Tombstones In Their Eyes Bandcamp: https://tombstonesswc.bandcamp.com/album/maybe-someday

Check out the video for “Open Skies”:

Song Premiere: “My Girl” by The Subjunctives