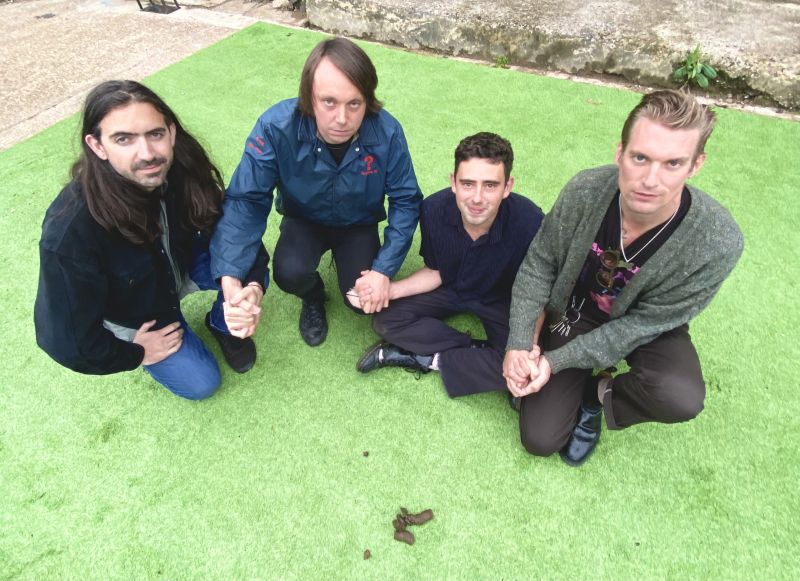 Morrison and Mirehsan have worked together on other projects, but Dog Heaven is an outfit specifically put together for the joy of getting loud and noisy. And balancing out the dissonance is their sure handle on more pop-centric melodies.

Dog Heaven are unleashing their debut album, (There Is Only) Dog Heaven, today via Rad Girlfriend (US) and Everything Sucks Music (Europe), and Rebel Noise is stoked to host the premiere of the raw, raucous, and roiling LP in its entirety.

Besides the band members’ mutual love of guitar riffage, they also share a deep devotion to canine companions, which is reflected in their band name and in the first song off the LP.

Morrison explains, “I’ve been playing with the concept of ‘dog heaven’ for a few years. It’s a simple idea, an appreciation of dogs as angels who deserve the divine afterlife that humans have thought up.”

(There Is Only) Dog Heaven isn’t really totally about loveable furballs though, and is mainly composed of a variety of human-centered themes that include individualism, isolation, relationship/connection woes, and psychological reactions to the pandemic.

Morrison relates, “Half of it was written as the global pandemic was beginning and then during its disturbances and effects. Some of the songs are about this limbo state and the feeling of being stuck in strange places.”

Despite the challenges of the virus-driven pandemic, and the lockdowns and self-isolation, the band members carried on in crafting an album that is both hard-hitting and cathartic in lyrics and sound/emotion, respectively.

Dog Heaven is both a love letter to ‘80s/’90s independent punk, garage rock, and grunge music and its own contemporary take on our fractured and tumultuous world, filled with bleak lyrics that are blasted out with punk fury – vocally and instrumentally.

Morrison comments, “We made the record very quickly with no frills at all. Last August - over two days, in high temperatures, wearing masks in a room that was about 9ft x 9ft - we recorded this. Josh [Ace] engineered and mixed the whole thing too. It was quick and fun, but hot and gross too.”

The full length’s tracks range from propulsive opening theme song “Dog Heaven” with its careening guitar lines and bludgeoned drums, to the rampaging hardcore punk swing of “(Kiss Me) I’m A Toad,” the smashing Replacements-like rocker and lead single “Quarantine Song” that drives by on a diving bass line and ringing guitar reverberations, and the swampy creep through the mire of “This Is Our Goodbye” that ends with defiantly shouted out vocals.

There’s even a reflective acoustic folk song on the record – “Miserable World” - with skeining guitar strings, mumbled vocal grumble, and background sounds that spirals into the relentlessly pushing “Slip Away,” the romping to hammering “No Stuff,” and quasi-slow-burner “Walk Alone” that mid-way through rises with furious vocals and guitar conflagration.

(There Is Only) Dog Heaven ends with a sliver of hope, as Morrison vocally channels Social Distortion’s Mike Ness on a sneeringly passionate rendition of Daniel Johnston’s “True Love Will Find You in the End,” this time simply titled “True Love.”

“I love that song,” Morrison reveals. “I think it’s one of the best songs I’ve ever heard. The original is so much better than our version, but it’s fun to play and sing. The songs I’ve written are all quite bleak and non-optimistic - so it adds an element of much-needed positivity, right at the end.”

Morrison generously details each song in an interesting and informative Track-By-Track rundown below:

“A tribute song for the creature I loved the absolute most, Barney. He’s was the greatest I’ve ever known. He made it until the ripe old age of 17, battling cancer in the last 4 years. He’s 100% proof of Dog Heaven.”

“Written in Ohio with Dylan and Jerry of Vacation. Jerome stated that when he drinks, his hair and nails grow. We suggested that maybe he’s just drunk for so long that we lose all track of time.”

“We started singing those first few lines and then “Kiss me I’m a (drunk, hairy) toad,” as opposed to a handsome clean-cut frog/prince seemed like a fitting chorus. That’s Dylan on the main vocals.”

“A tribute to a Townes Van Zandt song. It’s basically a blues jam about trying to get home, but not really having one to get to. You've been gone for so long that you can’t get back to where you come from, but also don’t even know where that is.”

“Written as the beginning of Covid lockdown restrictions in the States and the UK, March 2020. I had a wedding planned for May, [and] it seemed unlikely to me that all future plans would get cancelled, but people were starting to worry. The song is written from the point of view of someone who has got Covid and is going to die alone in isolation.”

“This song is two iPhone voice memo tracks pieced together. When we returned to the UK last April, my partner Victoria and I had to isolate for two weeks in an empty, closed pub/hotel (that my mum’s boyfriend owns) in the deep dark Welsh valleys.”

“All we had with us was hand luggage with our clothes. There was no phone signal, no internet… Just walking trails up and down old coal and slate mining hills and a guitar on the wall of the pub that was part of a Blues Brothers [film] - the movie shrine.”

“During this time, the fear of the reality of Covid was at its peak. Victoria was lying in bed with all the symptoms, unable to get up as her back was in so much pain. I’d had the same thing a few weeks before in the States. We both felt trapped and contagious.”

“I tracked the guitar and then the vocals and put them together on my phone. You can hear my mum’s boyfriend laughing and birds singing in the background. I like how it turned out.”

“We tried a band version at the recording session, but quickly thought that this [original] version had a lot more feeling. All we did was add a room mic and a few tambourine and floor drum hits.”

“This song was written a long time ago, I played in a very short-lived band called Mind Jail with two friends, Jen Calleja and Will Rene. “Slip Away” was one of the first songs I wrote for that band.”

“I made a demo in the same way as the track above. Mind Jail never got around to doing much and I felt a bit like some of the songs I was proud of didn’t get a chance to see the light of day; this one in particular. So we’ve given it a new lease of life.”

“It’s about watching someone fall out of love with you and completely disappear. You lose yourself too, in the process.”

“It’s kind of a snotty song about feeling completely trapped, with no purpose or possessions to keep your mind occupied. It was also written when isolating in the shut pub in Wales.”

“Another song about feeling completely lost, trying to find the place that feels as if [it’s where] you’re supposed to settle. Mission Failed.”

“This Could Be Our Goodbye”

“Billy wrote the music to this song, so I just had to write some lyrics and make it about something. I tried to think of the saddest thing I could… [It’s] about the estranged relationship I have with my father…”