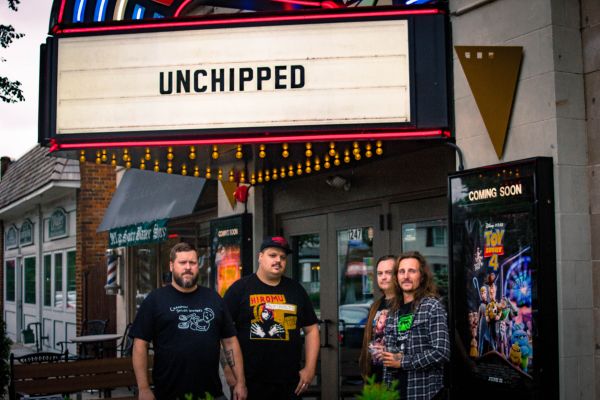 Unchipped are a newer socio-politically relevant hardcore/punk band hailing from Columbus, Ohio. So far in their brief existence of a year or two they’ve shared the stage with the like-minded intense acts Municipal Waste, Power Trip, Cherubs, Full of Hell, and the Obsessed.

Pat Snyder (vocals), J.R. Fisher (guitar), Ty Owen (bass), and Joel Archibald (drums) are all about playing shows and getting their socio-politically pointed messages across to their audiences.

Influenced by noise rock heavyweights Ministry, White Zombie, Jesus Lizard, and Minutemen, Unchipped unleash a powerfully raging sound and on-target lyrics (against societal hypocrisy, AI takeover, and loss of identity/individuality) all their own.

Their new self-titled debut album released today and Rebel Noise is totally stoked to be hosting the LP in its entirety.

Album-opener “1000 Lives” drops the listener in a discordant technological world of electronic and mechanical noise, with a man’s wavering vocal transmission talking about human survival on Earth and the need to evacuate the planet. Suddenly the actual song kicks off hardcore-style, with blasting guitars, frenetic bass line, and pummeling drum beats. Shouted out vocals shoot through with aggressive menace.

“Born to Kill” starts with a news broadcast about how impressionable young men are molded into killer soldiers, and then a clip is loaded and the track fires out with growled vocals and a machine gun-drum pace.

Climate change is addressed on hardcore “End Of Times,” which also has an accompanying video. A rhythmically pushing cycle pumps through the tune, while dark vocals chant, “End of times / No one’s spared.”

Alien civilizations rising from alien-human hybrids is the odd (and at times funny) topic of “The Seventh Kind,” especially with the continually looping, warped spoken word bit at its beginning. But then the jagged guitars kick in, massive slabs of drums fall, doom-rock to screamed out vocals enshroud the ears and it gets seriously heavy.

The opening monologue on the title track describes the lyrical MO of Unchipped. The band explain the meaning behind the album, revealing, "Unchipped is a wake-up call to an oncoming future of the surveillance state and the monetization and exploration of personal data through technology.”

“We created this as a mantra for the band, to focus our message about the dangers of a thoughtless, passive future. We want people to be conscious about what freedoms they are willing to passively give up, and the fire repercussions of those decisions.”

“Artificial intelligence and machine-learning are incredibly powerful tools that can be used to either liberate humanity from illness, poverty, and the brutality of the world or can be used to subject humanity to new levels of subjugation.”

Staticky police radio chatter hits last track “Big Man” with talk of shooting a man in the head. As the song churns and burns with a vengeance, defiant vocals tackle police brutality, yelling out, “Abusing your power / Is this how you get off?” (And the same could be said for the current occupiers of the White House....)