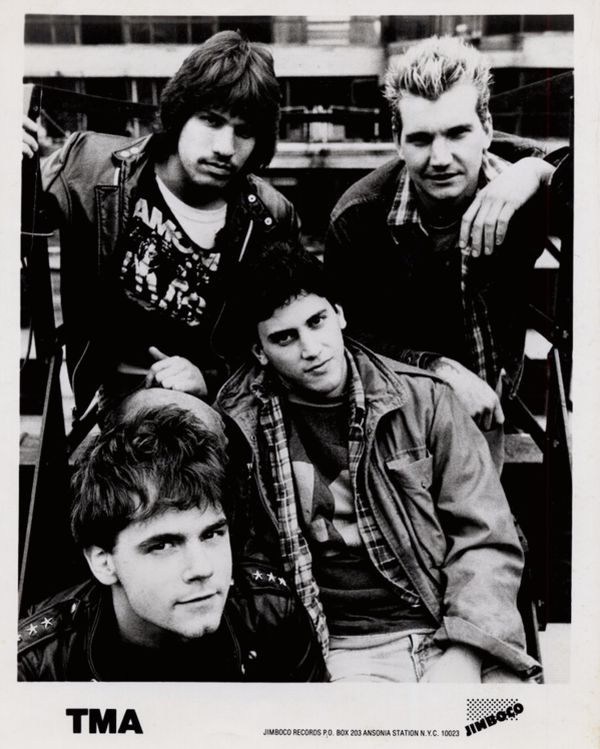 The 1980s was a golden era for underground hardcore punk bands from the SoCal region and NYC, with some who occasionally broke into the mainstream (Misfits, Black Flag, Danzig).

New Jersey was in on it too with North Jersey punk rockers TMA kicking hard against the powers that be and the society they lived in.

The band unleashed a few hardcore records, including What’s For Dinner? in 1983 and Beach Party 2000 in 1987 via JImboco.

Direct and thrashing anthemic tracks like “(I’m In Love With) Nancy Reagan,” “Surf Nazi,” and “Love Is All Around” (which Hüsker Dü later covered) from What’s For Dinner? and more complex, post-punk-styled numbers like “Feel Like Hell,” “Don’t Waste Your Time,” and “Tomorrow” from Beach Party 2000 (which was produced by Wattage), were unjustly left in the dust.

TMA’s (AKA Tom, Mike, and Al – or ‘Too Many Assholes’) relative obscurity over the years is about to be a thing of the past with the imminent arrival of a jam-packed Super Deluxe reissue package that includes the two albums What’s For Dinner? and Beach Party 2000, as well as the never-before-heard 6-song Just Desserts EP.

The mammoth compilation is being released by Left For Dead Records and will officially drop on October 28th (with a limited pressing of 500 vinyl records, and a pressing of 100 for the limited splatter vinyl box set).

Rebel Noise is dead-stoked to host the premiere of the gargantuan reissue album is all is raw, racing, raging, and still-relevant glory.

TMA have been praised by the likes of Jello Biafra, Tim Yohannon of MAXIMUMROCKNROLL (“…they really shred. TMA play totally fast, gnarly thrash with lots of hooks ‘n’ tunes. Tight and clean too.”), Matt Pinfield (“Their songs are great and show off their sense of humor about everything from politics to everyday nonsense. Their shows were complete chaos. They were both fun and dangerous, but never took themselves too seriously. TMA is a band that deserves to be known!”), and Rob O’Connor (“Tom, Mike, Al and Dave had a blast and I, for one, am fucking glad they had the sense to get it down on tape.”)

What made TMA something extra-special was the band members’ focus on the music, in whatever form that it took. They started out as a straight-ahead hardcore punk act, but somewhere along the line they blended in other influences like post-punk and metal, inspired by outfits like Killing Joke and the Chameleons.

The lo-fi-recorded hardcore punk songs on What’s For Dinner? blast off like a rocket, exploding in the ears with speedy and slicing guitar jags, frantic bass lines, frenetic drum pummel, and frenzied vocals from Oldfield.

Beach Party 2000 upped the production value and the track are also shot through with more melodics and atmosphere, scrambling with fiery guitar burn, restless bass line urgency, kinetic drum hits, and passionate vocals from Emanuele, who took over lead vocals after Oldfield left the band.

Just Desserts circles back to the beginning, slamming hard with no-holds-barred punk rock. So take your pick, or pick ‘em all! Crammed with 42 tracks total, this compilation offers something for any ‘n’ every punk rocker.