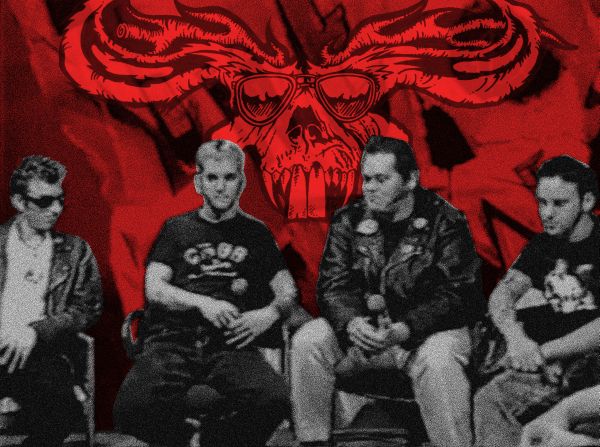 Back in 1999, on the edge of the millennium, Dayton, Ohio-based punk/rock ‘n’ roll band The Jackalopes rose from the remnants of sludge/punk band Carcass On The Highway and pop-punk act The Migraines.

The Jackalopes haven’t played live since 2016 and a planned run of shows featuring various horror punk outfits has been nixed for now due to the pandemic.

But 2021 will see the release of some of The Jackalopes’ previously unheard gritty, speedy, and intense music from their vaults.

Actually, listeners don’t have to wait until next year to hear a new vintage track from the band!

Rebel Noise is stoked to host the premiere of the passionate performance video montage for a blazing cover of the Ramones’ classic “You Should Never Have Opened That Door,” officially out on October 30th via Mosquito Hawk Exquisite Recordings.

They run through the track at full speed, blasting out with jagged guitar grind, a chugging bass line, kicky drum hits, and emotive vocals. The song was recorded in the early 2000s for a Ramones tribute album that never saw the light of day.

Just in time for Halloween it’s risen from the graveyard of unreleased music to give listeners a scary-good punk rock time.

Wells comments, “When we were at our height, it was the era of the punk rock comps. We were always being asked to submit music for these comps and many of them were life-changers for us - leading to our addition to some really cool shows and tours.”

“But other times they were a disappointment, conceptualized in some punk kid's parents’ basement with no plan and no budget and we'd record these songs and send them in and they'd never get released.”

“This Ramones cover is one of those songs. We worked hard on getting it super-tight and recorded it and it never came out. It has been gathering dust on a CD-R in a drawer for nearly 20 years.”

In addition to Mosquito Hawk Exquisite Recordings’ Bandcamp, "You Should Never Have Opened That Door" will be available on Spotify, Apple Music, and other streaming platforms.