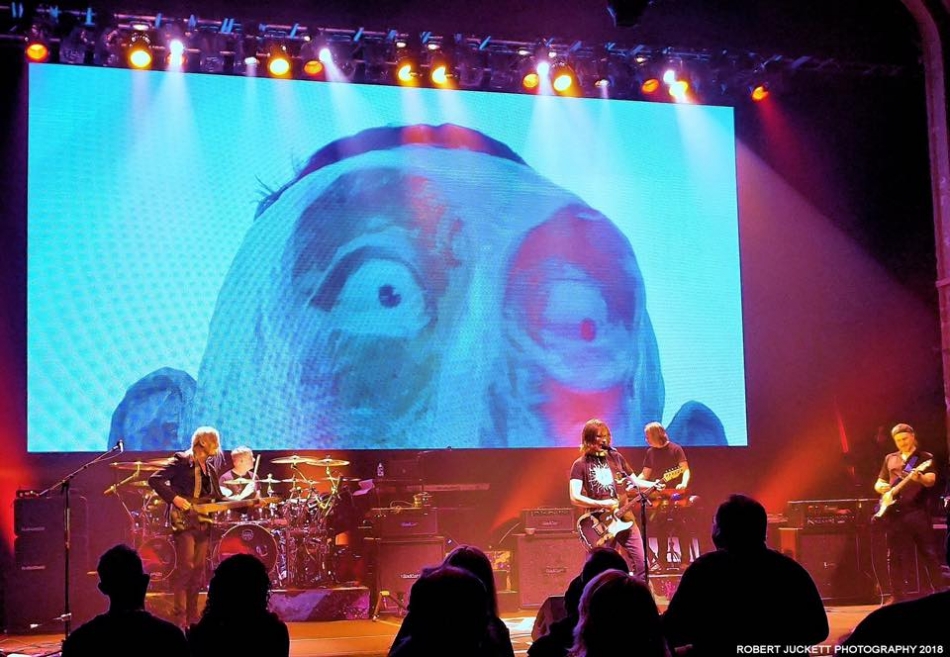 Once again, Wilson blew his audience away at the Keswick Theatre by filling his three-hour set with some of the most diverse music, arresting visuals, and commanding commentary he’s ever showcased.

English musician Steven Wilson and the Keswick Theatre are like two peas in a pod, as the genre-bending singer/songwriter/composer frequently stops at the Glenside, PA venue during his U.S. tours. Of course, it’s a great setting for his multifaceted sets, and his latest performance—this past Wednesday, April 25th—was no exception. A mixture of tracks from his fourth and fifth solo LPs (Hand. Cannot. Erase. and To the Bone, respectively) and surprise gems from his most celebrated band, Porcupine Tree, the show presented Wilson at his most sonically and visually thrilling, further cementing his place as a truly outstanding, steady, and dedicated artist.

Opening for Wilson was fellow countryman Paul Draper, who’s best known as the frontman of the now disbanded alternate rock group Mansun. Basked in blue and pink lights and seated alongside a supporting electric guitarist, Draper performed a brief and peaceful acoustic set comprised of a Mansun track (“Disgusting”), pieces from his new solo album, Spooky Action (“Friends Make the Worst Enemies,” “Things People Want”), and his EPs (“The Silence is Deafening”). For the most part, it was a modest and concise performance with some interesting effects (especially from his accompanying player) and a bit of banter about how few people knew about Mansun. To be honest, his voice was a bit too loud compared to the instrumentation, but the songs were engaging and unassuming enough to warm up the crowd and reveal Draper as an interesting voice in his own right.

Shortly after Draper finished, eerie music and a preliminary film (flashing words like “ego,” “threat,” “hate,” and “grief” over pictures of crying children, criminals, Richard Nixon, and various religious imagery) played to “test how you will react to the concert.” It was a typically cryptic, ominous, and profound way to introduce music and ideas that Wilson and company—keyboardist Adam Holzman, drummer Craig Blundell, bassist Nick Beggs, and guitarist Alex Hutchings—would provide over the next three hours.

Naturally, they arrived on stage to staggering applause and launched into a fiery performance “Nowhere Now”; from there, they interspersed several other standouts from To the Bone (such as “Pariah,” “People Who Eat Darkness,” “Song of Unborn,” and “Refuge”) with great selections from Hand. Cannot. Erase. (“Home Invasion,” “Regret #9,” and “Ancestral”). Of course, they were spot-on renditions, as was their version of “Vermillioncore” (from 4 ½ ). Undoubtedly, the quintet replicated some of Wilson’s best recent solo work exceptionally.

As stellar as those tracks were, though, watching the band pull out several Porcupine Tree classics was arguably even more gratifying. Seeing as how both 2002’s In Absentia and 2005’s Deadwing were recently reissued on vinyl, it’s not surprising that they included “The Creator Had a Mastertape,” “Arriving Somewhere but Not Here,” “Lazarus,” “The Sound of Muzak,” and perhaps the best song Wilson has ever written, “Heartattack in a Layby.” It was especially intriguing to compare Wilson’s two eras in one set and appreciate how his writing has become more complex and experimental—though not necessarily superior—over the years.

Visually, the show was quite captivating as well. Not only did the lighting schemes consistently provide a variety of alternating colors and temperaments (depending on the intensity and mood of the songs), but there were also plenty of fascinating videos to complement the selections. For example, orange skies and clouds decorated “The Creator Had a Mastertape,” curious depictions of a female traveler joined “Home Invasion,” a narrative cartoon (that kind of mixed Rear Window and Sin City) enhanced “People Who Eat Darkness,” and men with papier-mâché heads fought in the woods during “The Same Asylum as Before.” Likely the most meaningful blend of sound and sight, however, was when Ninet Tayeb appeared on a screen in front of the band during “Pariah”; it was an excellent means to make up for her not actually being there to sing her parts, and the crowd loved it.

As usual, Wilson justifiably moved like a rock star and provided humorous yet biting anecdotes throughout the set. In particular, he joked about needing bad name suggestions for his new 1963 Telecaster and explained why “Song of Unborn” is a “sad but positive” track about “the gift of life.” Easily the most deserved and revealing remarks came when he asked the audience to do some “disco dancing” during the most contentious piece of his career, “Permanating.” In introducing it, Wilson remarked on the silliness of genre labels, as well as how “people get angry about [him] playing joyous pop music” even though he “grew up with it.” It was a fair retort, to say the least, as he’s certainly written plenty of pop songs in the past, and as I said in my review of To the Bone, “he’s not known for writing joyful material, so it’s refreshing and endearing to hear him embrace such unrestrained blissfulness.”

Once again, Wilson blew his audience away at the Keswick Theatre by filling his three-hour set with some of the most diverse music, arresting visuals, and commanding commentary he’s ever showcased. Really, his live shows continue to become more confident, lively, and economical as his career soars, and while fans will always argue over preferences for his solo material or his work with Porcupine Tree—a useless debate, honestly, since both are equally exceptional in different ways—no one could deny the cumulative brilliance of the catalog he and his band highlighted that night.