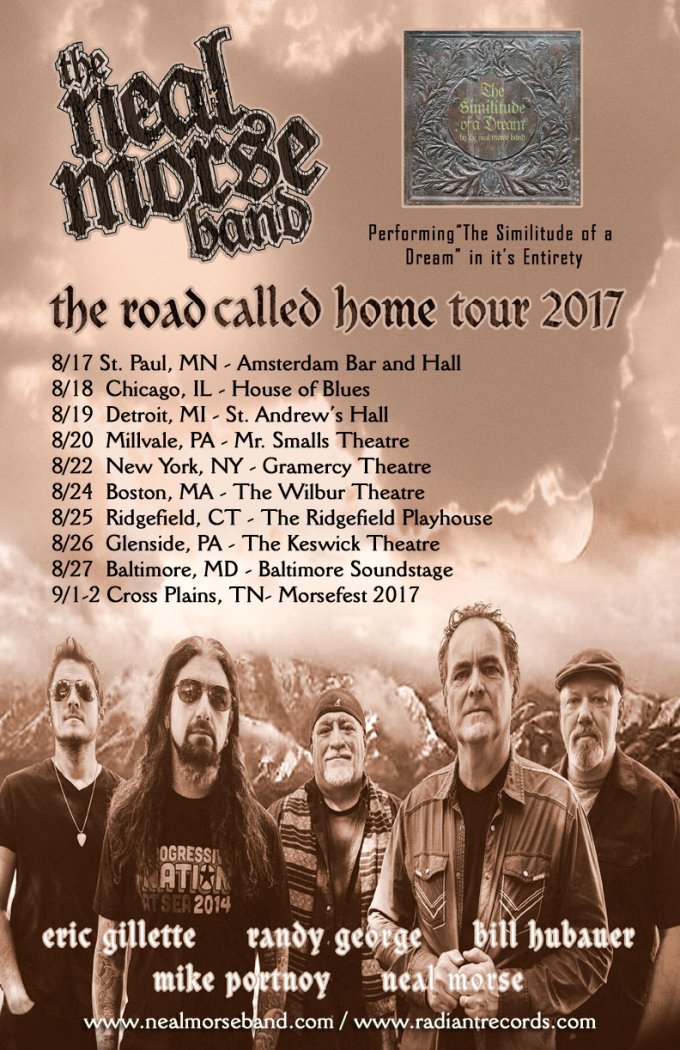 You could watch The Neal Morse Band play the same material several nights in a row and never get sick of it because of how unequivocally technical, catchy, moving, and, well, fun their material and/or personas are.

If there’s one thing American prog rock troupe The Neal Morse Band (guitarist/keyboardist/vocalist Neal Morse, bassist Randy George, drummer Mike Portnoy, guitarist/vocalist Eric Gillette, and keyboardist/vocalist Bill Hubauer) enjoys more than recording incredible studio epics, it’s replicating them perfectly live. Over the past few years, they've performed (and subsequently released as robust collector’s sets) many superlative works, including both Testimony sequences, Momentum, ?, Sola Scriptura, and even Morse's final masterpiece with Spock’s Beard, Snow. Last November, they issued what many consider the greatest album of Morse's career, The Similitude of a Dream. Naturally, the NMB has been touring it for the past several months (including a headliner spot at this year’s RoSfest), and last night, the quintet brought it to the revered Keswick Theatre in Glenside, PA. As expected, they played the full-length flawlessly, which, in conjunction with some humorous banter, dazzling lights, thematic visual projections, and surprise encore extras, made it an unforgettable night for all in attendance.

Because so much has already been written about The Similitude of a Dream itself, I won’t go into an LP exploration here. Rather, I’ll talk about what made the live version so astounding. First and foremost, the NMB always opens a concert in magnificent fashion, and that was no different here, as a blend of album artwork, flashing orange, red, and blue lights, and an orchestral overture heightened anticipation very well. In fact, the visual components complemented the sonic journey wonderfully throughout the night, as many spiritually and/or narratively appropriate pictures and videos were projected as the record unfolded. (Highlights included the astral imagery that adorned “The Dream,” the “Ways of a Fool” clip, the Twin Peaks-esque trees during “Breath of Angels,” the outraged prisoner behind “The Man in the Iron Cage,” and the drawn dragons and fire of “The Battle.”) In addition, both Morse and Portnoy wore hoodies and goggles at certain points to add Peter Gabriel-like theatricality; Morse even put on a white mask and shined a flashlight in his face during “The Mask.”

The encore included three tracks: “Author of Confusion” (from 2004’s solo outing, One), “Agenda” (from the first Neal Morse Band collection, 2015’s The Grand Experiment), and “The Call” (also from The Grand Experiment). As with The Similitude of a Dream, they nailed each part, which never ceases to amaze since it’s some of the densest and most colorful, frantic, and melodic modern progressive rock. Also, special credit must be given to producer Rich Mouser, who ensured that every note from every instrument was equally discernable and impactful. Really, it was one of the cleanest mixes I’ve heard in a live setting.

Of course, what truly makes a Neal Morse Band show special are the interactions between the band and the crowd. For instance, Morse frequently jogged around the stage, smiled as he sang, closed his eyes introspectively as he played, and urged the crowd to join in. Combined, these humanizing moments showed just how much joy and pride he gets from his work. Likewise, he sometimes stood beside another player and egged or cheered them on (as if he was just as impressed as the audience with their staggering musicianship); he also knelt and greeted some people at the front of the stage before “Sloth,” which was funny. Similarly, Portnoy pretended to play a flute fill with his drumstick during “Slave to Your Mind” and fall asleep during “Sloth.” He also thanked the audience and called Philadelphia “the hub of prog in America” prior to “Freedom Song,” demonstrating how humble and grateful he still is. As for the audience, they routinely sang or clapped along and raised their hands, showing a level of devotion and engagement that’s fairly unique to an NMB performance.

Although the aforementioned factors were expected, they were still as exceptional as ever. Truthfully, you could watch The Neal Morse Band play the same material several nights in a row and never get sick of it because of how unequivocally technical, catchy, moving, and, well, fun their material and/or personas are. Like any magnum opus, you may have seen it many times, but you’re in awe all the same. Just as The Similitude of a Dream was another benchmark for its creators, last night’s show at the Keswick Theatre was the latest example of why The Neal Morse Band is a one-of-a-kind act. Here’s hoping they bring an even newer work on the road very soon.