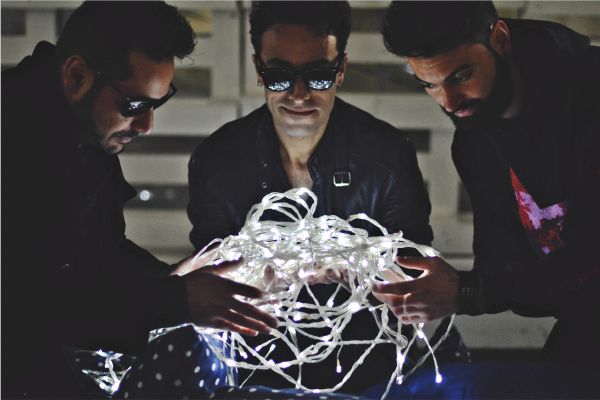 Hiya!  So good to meet you and find out about your upcoming release, the Fader EP, out March 6th via Vipchoyo Sound Factory, and your history as a band – and I’m assuming as friends.  Were you buddies before starting the band in 2009?  What prompted you to form Electric Floor?

Hello!  Electric Floor is an Italian band formed in 2009 and the majority of our songs have been in Italian.  In 2014 there was a drastic line-up change and, since Costantino and I were friends from before Electric Floor’s inception, he ended up joining the band on synths and programming.  Fabio, a work colleague of Costantino, has become the bassist.

From what I understand, Fader is a bit of a departure from your previous two records and two singles.  What changes did you make to your sound – and why did you do so?

Because of the line-up change, the influx of new members and ideas has prompted an evolution of our sound. Programming and synths replaced drums. Once there had been two guitars; now there is only mine and it’s fun to experience something new.

Your recent single “Bluedive”, which premiered at The Big Takeover, is a driving post-punk/electronic amalgam which actually sounds British!  Are most of your musical influences British bands?

Definitely! Most of our musical influences are British.

After hearing the appealing taster “Bluedive”, what else can listeners expect from the Fader EP?

Listeners can absolutely expect an honest album.  Fader is like a truthful tale about ourselves, with all our flaws and virtues, ugliness and beauty.  Fader will come out in March and we created it with our friend and sound engineer Alberto La Riccia of Echo Mobile Studio.

How did you hook up with the Vipchoyo Sound Factory label?

Vipchoyo in an Italian label founded by Stella Diana, our friends and one of the best Italian shoegaze bands.  There’s a strong friendship between us and it was a pleasure working with them.

You’re based in Cosenza, Italy and I’m assuming you grew up there.  What is the music scene like in this city?

There was a big music buzz in our city of Cosenza a few years ago. There were a lot of clubs where we could play and so the musicians had the luxury of playing at various venues.  Now we’re living in a transition period that maybe is a reflection of current political situation, but I believe that everything can still go well.

Do you feel the desire to move to a music hub like London, NYC, or LA?

It would be nice to play anywhere.

Not only have you changed from your prior post-rock sound, but the lyrics are also in English on more recent material, including “Bluedive”.  Was it a natural transition to switch from Italian to English?

The programming and synths give our songs are more ‘international’ sound, as well as our move to English vocals.

In 2015 you dropped the single “My Bloody G”, which got great press and more opportunities for you as a band.  Did you realize beforehand that this would be your breakthrough song?  What does the title stand for?

I didn’t imagine what would happen at that time. It wasn’t even my main focus. Music is our passion and we weren’t intentionally trying to get the press coverage that the song got.   “My Bloody G” stands for My Bloody Grace.

Speaking of meanings, why did you name your band Electric Floor when you started out as a post-rock band with no electronic music component until recently?

‘Cause when we named this project, it was in keeping with the thought of how we felt when performing live – that electric feeling.  We seemed to feel an electric vibe coming up from the bottom, up from the floor.

Will you be supporting the release of the Fader EP with live shows?  If so, are you focusing on Italy or will be performing in other countries as well?

We’ve had several live requests abroad, but unfortunately, we had to postpone our live shows for economic reasons.  But certainly we will perform in Italy.

Lastly (and maybe kinda silly), one of your publicity photos is of the three of you holding and staring at a tangle of bright lights – which at least in my mind evokes the image of actress Winona Ryder holding and talking to a ball of Christmas tree lights in the hit TV show Stranger Things.  Was this connection intentional or am I drawing a parallel where there isn’t any?

Oh no, that’s just an ironic photo. It’s like an alternative, but silly use for Christmas lights, where we bring them everywhere, including the photoshoot!