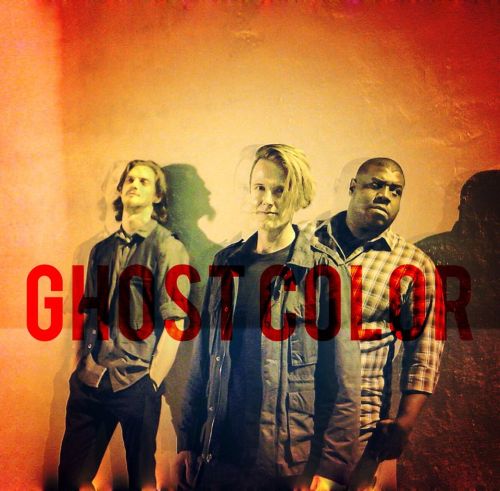 The members of Sacramento, CA-based post-alternative rock band Ghost Color chat about their recent potent and melodic EP, musical background, and what’s on the horizon.

Heya guys!  It’s so cool to have the chance to touch base with you about your recent EP, the powerful American Book of the Dead, and what’s coming up for you.  Before we dive into all of this, can you list who’s in the band and what instruments you play?

Chris: I’m Chris Winsted and I play drums and sing.

Bryan: I’m Bryan Harty and I play the bass.

I’ve read that you’re a heavy ‘post-alternative’ (rock) band, but I’m not sure if you came up with that description or the music press did.  Do you feel that a good descriptive fit for your intense and expansive sound and outlook?

Chris: Someone at a gig we played called us that and we liked the term. None of us had ever heard it before, but it just rang true to us.

Bryan: I think it fits with what we are doing. ‘Alternative’ music is so many things that it’s hard to pin down. We haven’t been around long so I think we fit in the that wave of bands like Daylight or Letlive that I’d consider post-alt.

When I listen to American Book of the Dead, the word “turmoil” comes to mind again and again – sonically, vocally, and lyrics-wise.  What events or mindset shaped this restless, pressing, anxious, but ultimately cathartic atmosphere?

Chris: Getting and beating cancer while stopping heavy drinking was something I was going through when we were writing this EP. Along with a close family member dying last year, that really shaped my mood and lyrics for American Book of the Dead.

Eric: All three of us had to learn to give up certain behaviors and appetites if we wanted this band to work. It’s still a struggle at times.

Bryan: We have always given each other the room and support needed to work through issues. We all met at kind of a weird time in each of our lives.

During the writing and recording of the EP, was this state of flux difficult to exist in?  Or was it a way to clear out the possible negative experiences and/or uncertain emotions you were facing?

Chris: This EP was therapy for me for sure.

Eric: Yeah, I didn’t know how much we needed it looking back on the process now. It gave me something to look forward to. “I can’t do this or that because we need to be at the studio early tomorrow, etc.”

Bryan: The whole experience made us a tighter unit, that’s for sure.

Are you all natives of Sacramento, California or did you relocate to the area from elsewhere?

Chris: I was born in Germany, but moved to California at age six.

How did you connect to form Ghost Color?

Chris: Eric and I had a mutual friend that introduced us after both our old bands had ended. Thought we’d get something going right away and he was right.

Bryan: Eric answered a ‘Bassist looking…’ ad I put up online. I came out a couple days after we talked on the phone. Things just clicked right away.

Do you have very different musical backgrounds or do you have similar histories, like maybe playing in previous rock bands?

Bryan: Chris and Eric have A LOT of band and road time under their belts. Eric’s last band, March into Paris, did something like 200 -plus shows and did the whole industry-trip thing. Same with Chris’ old band The Freshest Sushi. This is my first band.

Eric: Bryan is quite a bit younger than us.

I didn’t realize American Book of the Dead was your 2nd EP and that you had already put out a self-titled debut EP last year.  How would you compare these two records and their place in your collective or individual history?

Chris: Our first EP was a rush job.

Eric: I agree. We wanted to get something out there. I like all the songs, but they are songs we put together on an EP, whereas American Book of the Dead is an EP we put together.

Bryan: I feel American Book of the Dead put us together; not the other way around.

Chris: Yeah, me too.

What artistic influences inspired you this time around?

Chris: That’s always a hard one…

Bryan: We knew we wanted our sound to be huge, melodic, and rhythmic. I listened to a lot of Miles Davis, System of a Down, and as much classical music as I could.

Eric: I really got back into post-rock and math rock while we were making this EP.

Chris: I got into R&B for the first time ever in my life last year. I’m sure Sade and James Blake had an influence on the EP.

Hmmm, not sure I hear any Sade or James Blake in your music… So what’s next on your schedule?  Have you been or will you be touring to support American Book of the Dead?  Are you planning on shooting a music video for a track off the EP?

Eric: We have an artist named Amber Shell working on the visual version of the EP for us. It should up on YouTube and whatnot in about a month.

Chris: We really aren’t into touring or doing a bunch of shows; not right now anyways.

Bryan: We are sticking to gigs with a 10- or 12-hour drive-time from Sacramento for now. And only doing like one gig a month till we finish our next EP. We have a vision of what we want our shows to look and sound like and don’t want to hit the road until it’s as close to what’s in our heads as possible.