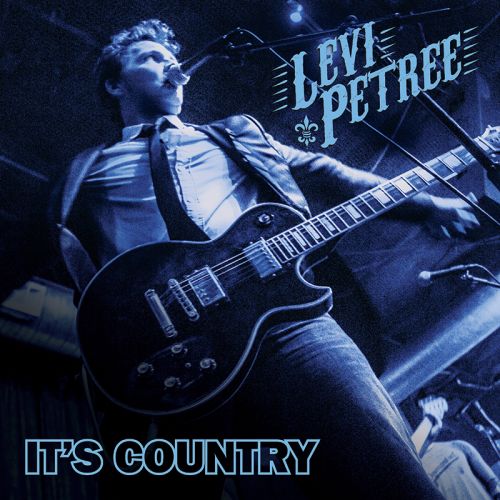 Ragin’ Cajun Levi Petree may currently be located in Los Angeles, but his roots are in Lafayette, Louisiana where he grew up on the bayou.  That unique environment and upbringing runs through Petree’s blood and informs the music that he creates.  The singer-songwriter/musician also blends British punk, New Wave, 1970s Outlaw country, and classic heartland rock to into his sound.

Petree is set to self-release his upcoming debut album, It’s Country, on March 3rd.  Most of the songs recorded for the album had been in the live repertoire he had built up with his backing band, The Radio Publica. Sean Novak, bass player and Petree’s right hand man, was the key force in guiding the songs to the finish line. John Salgado, Jr., who’d joined the band after befriending Petree at an East L.A. ‘Morrissey-oke’ bar, provided the guitar fireworks.

Wanting to go all out on the production value, Petree reeled in his network of musician friends he’d built up in L.A., from Liz Beebe (The Dustbowl Revival) on vocals and washboard to John McKenna of L.A. Irish band Slugger O’Toole who added his accordion on the album’s back half,  Aedan MacDonnell on accordion,  and Erick Szabo at the piano and organ.

With songs that are lyrics- and guitar-driven and which boast a healthy dose of humor and a touch of American swagger, Petree’s album was recorded at Exposition Studios in Culver City, CA, with Chad McKinsey at the production helm. The record was mixed and mastered at Exposition Studios, with additional mixing done by Paul Broussard at Leap Studios in Lafayette, Louisiana.

The album title It’s Country, said with a wink and tongue planted firmly in cheek, was the direct response given by a friend when asked to describe her thoughts on Petree’s first public performance. It was always meant for a laugh, but whether people were thrown by the occasional twang in his voice, or the presence of guitars on a classic structure, the country comparison started to happen more and more. Rolling his eyes at what he felt was a generalization, Levi began to embrace the description “It’s country” as a smartass’ act of defiance; an inside joke that maybe this is just what people called rock ‘n’ roll nowadays.  “I still believe in the promise of rock ’n’ roll, and our aim is to remind people it’s out there,” says Petree.

“Do What You Want”, which premieres right here, does just that.  It’s a gritty, but upbeat rocker filled with Petree’s direct, but rich vocals, harmonizing backing vocals, jags of distorted guitar, deep bass line twang, an emphatic drum beat pace, and constant smash of cymbals scintillation.

Hello Levi!  It’s a great pleasure to have this chance to chat with you.  Can you please go into the inspiration behind “Do What You Want”?

The inspiration for this song stands about 5'4" with jet black hair and piercing blue eyes. There was history there, and after she put the kibosh on us repeating it, my 29-year-old teenage self went home and pouted into my writing pad. The first verse came out of a classic case of replaying, or acting, the conversation out loud and I started to mimic her in a mocking tone ("What's my age again?").  Almost immediately, there was a happy accident of "Hmmm... that actually sounds like a decent melody."

So, the initial spark basically came from me whining about not getting my way, but there's a real convoluted sense of irony in that the rest of the lyrics evolved into me realizing that I was probably the one in the wrong. On first listen, I'm sure it comes off as me being scorned and dismissive of someone else. The truth of it, though, is that a lot of it is me being dismissive of myself and certain patterns of behavior. It's an assumption on my part of what certain people probably felt I'd done to them. Sorta my comeuppance.

What was it like working on this song in the studio?  How did the recording process go?

Even though the recording of this one was very start and stop, I remember it being one of the more fun ones to do, at least musically. (Not so much vocally, which I'll come back to.) The two big influences on this song are the Sex Pistols and Weezer. Sean, our bassist, is a huge Weezer fan and he really took hold of some production and background vocal choices on this one. That left me to focus on the guitar parts, where I was definitely trying to emulate Steve Jones (complete with Gibson plugged into a Marshall). There's video somewhere of me with a big goofy grin recording "swooshes" and making faces straight out of old Pistols documentaries. ("Never mind the bollocks, ya'll!!!")

Vocally, I stressed over this one for a while. I think I was too worried about what type of voice it should be sung with, partly because I didn't trust my natural singing voice to match the energy I felt the song required. The natural timbre and inflection of my voice is more Dwight Yoakam than Johnny Rotten, but I was a little in my head about whether that would work. Because of the Sex Pistols influence on the song, I played around with some snarl and kinda created character voices that weren't sounding right. I think I started to drive Sean crazy and he finally had to put his foot down, insisting I just sing the damn thing. "Three takes - best one, move on!"

I'm still learning to trust my own voice when I take it out of the comfort zone. Now that I'm a little removed from the recording, I'm able take it as a lesson that sometimes you just gotta shut up and sing.

Got any great stories about working on recording this song - funny, crazy, etc…?

Anybody who's ever seen us live knows that Sean bounces all over the stage and does an incredible job of selling this song. He's a '90s punk rock kid and just has this really great energy about him. When we'd play it live, he'd throw in this hilarious Ric Flair-like "Wooooooooooo!" right before the second chorus. I really wanted to make sure we got one on the record, so we set him up with a microphone and let him go to town. While he was doing that, I filmed and later edited them all into a "Woooooooooo!" super-cut, which kinda sounds like Mick Jagger at the beginning of "Sympathy for the Devil." I go into a giggle fit every time I watch it on Instagram.

There's also a moment before John's guitar solo that was an improvised idea. When we'd play the song live, I'd always call attention to John to let the audience know he was about to start shredding. A "hold onto your butts!" moment, if you will. When I was putting vocals on the recording, I felt like something was missing when the chorus went into the solo without some type of segue. I started throwing different guttural sounds at it, but nothing seemed to fit. I spent a lot of time on this small, almost throwaway moment and it was starting to become ridiculous.

There were two things that eventually led me to what you hear on the record. The vocals on this song were recorded around the time David Bowie passed away and I'd been spending a lot of time listening to his music. In addition to Bowie's own catalog, though, I kept listening to Peter Schilling's song "Major Tom (Coming Home)," which is an homage to Bowie's "Space Oddity" and had the great "Fooooouuuuuurr, Threeeeeeee, Twwwwooooo, One!" before each chorus. So, that was already on my brain. The second thing is that the idea of a countdown seemed to fit within the context of our band. For reasons he probably doesn't want in print, years ago I lovingly nicknamed John (Salgado, lead guitar) the "Space Man." Since I wanted to announce what I felt was a pretty great solo by John, I thought a countdown was perfect for the Spaceman before he took liftoff. So, that's why you hear the "4,3,2,1" coming from mission control. It's me sending John into orbit.

I'm sure you had an idea in your head of what this song would sound like.  How does the end result measure up to that idea in your mind?

I always wanted it to be a swift kick in the ass and I think we got that. Any time we play it live, I like to lull the audience with a false sense of quiet. There's usually a softer number right before it and I let the end of that sink in before jumping right into a loud "1,2,3,4" and going airborne for the opening chord. That opening moment was something we had to get right in order to set up the rest of the song.

As for the rest of it, the recording process was a great opportunity to finally add all the other layers we couldn't replicate live. As I mentioned before, other people in the band had really taken to this one and it was cool to step back and let them add things I hadn't thought of. I think it represents the best of everyone in the band. It's so explosive, but well contained and they each pack everything they have into it.

How do you think this song represents you as an artist, sonically speaking?  What do you hope listeners take away from having listened to it?

Oh, I think this one perfectly captures the rock 'n' roll fantasy of what I want myself to be. I occasionally get told (and can accept at times) that the softer, more acoustic and country stuff is a more natural and comfortable setting for my voice. But in my heart, I want loud guitars. I want energy, I want chaos, and I wanna move. That's what speaks to me. What I hope listeners find in it is a song they pump their fist to while shouting along at full throttle. We designed it to be a volcanic blast of energy and I sincerely hope it's a song people put on when they need something visceral.

Interview with One Track Minds