Interview with Professor and the Madman 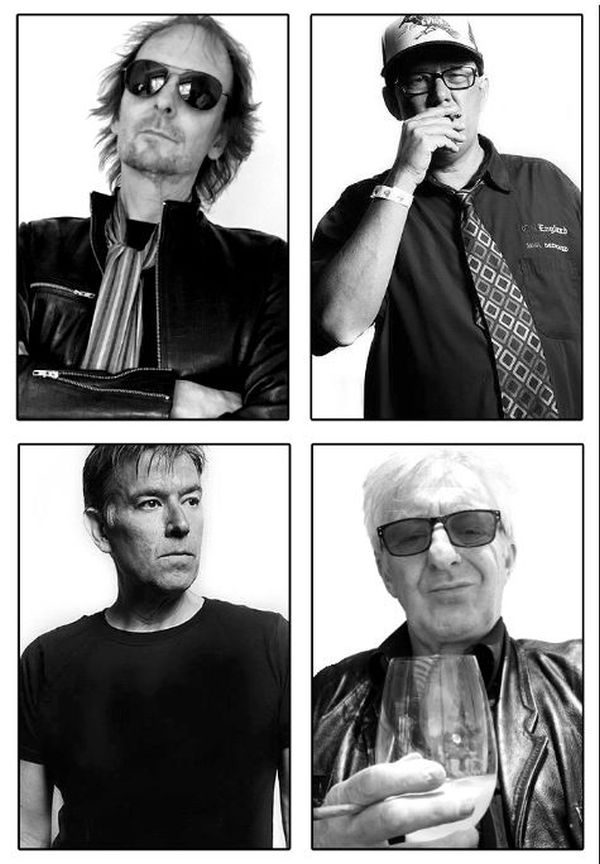 Sean Elliott (D.I.), co-frontman and co-songwriter of rock ‘n’ rollers (and more) Professor and the Madman, details their new album, band camaraderie, and musical past.

The nine tracks of Disintegrate Me encompass elements of British Invasion rock, Britpop, psych, prog, power pop, Goth, and even country, all underpinned by the melodic punk energy so clearly imprinted on the band’s DNA.  The LP was co-produced by the band and David M. Allen (The Cure, The Damned, The Sisters of Mercy).

Hello Sean!  It’s so good to have this chance to touch base about your collaborative project Professor and the Madman.  Did you and Alfie co-found the band or was Paul Gray there at the start as well?

No, the original concept was for me and Alfie to do the recordings ourselves just for fun.  Since we both can play multiple instruments, the process was easy.

What was the spark that ignited the rock ‘n’ roll passion that is Professor and the Madman?

I would say a desire to do something different with no musical restrictions. We’ve both advanced musically over the years, so we wanted to push our capabilities. We understand that not everyone one is going to like it, but we’re both accustomed to people not liking what we’re doing. Punk rock wasn’t a very popular genre when we were there.

You’ve brought Rat Scabies on board as a 4th member.  What has the balance been like in going from a trio to a four-piece?  What is it like working with Paul and Rat Scabies, who were both in legendary band The Damned?

Actually, Paul was the fourth man to come on board. Disintegrate Me will be his debut with us. Rat had already recorded with us prior to the new record. Recording with them is a dream come true for both of us. They just go for it and it turns out great. Those two have a certain magic when they track together.

You and Alfie were both in the long-running punk band D.I.  Were you both in the band during the same time period?  What have you brought to Professor and the Madman from your stints in D.I.?

Yes, Alfie and I were the guitarists on Live at a Dive. He and I shared the stage for about a year in 1991. I don’t think there is anything reminiscent of the D.I. days on these recordings, simply because the rhythm section is so much different. I’d guess that the guitars might sound familiar? We haven’t really changed our guitar styles, so I don’t know. I guess the D.I. fans would be better judges than we would.

Professor and the Madman is not just about rock.  What other genres do you incorporate into your sound?

It’s not really about genre either; it’s more about just letting the songs be what they are. There’s nothing worse than a good song that has been modified to fit a genre. If you wrote it on a piano, and it sounds good on a piano, then use a fucking piano. We’re musicians, period. Genre is for the other guy that writes his tunes with a wardrobe in mind. Been there, done that… It’s boring.

On February 23rd you’ll be releasing your next album, Disintegrate Me. Is your recently released single “Electroconvulsive Therapy” indicative of the album’s sound or is it just one sonic facet of many?

It is one of many. We’re not afraid to expose our influences, so you’ll hear a range from the ‘60s to the early ‘80s.

What bands, singers, films, and/or viewpoints/mindsets influenced the tracks on Disintegrate Me?

It’s kind of hard to get away from the early ‘80s Damned sound because of Rat and Paul. I mean, you could put those two on a Yanni record and it would still sound like The Black Album. Behind that, you’ll find all sorts of mindsets. Again, we stay true to the songs, so you might hear Beatles/Pink Floyd/Bowie, and next you might hear a Rikk Agnew or Ron Emory style poking though. We’re all over the place.

What kind of subjects do your lyrics touch upon?  Any socio-political statements made about the current close-minded and destructive government rule in the US and UK?

No real politics here. I can’t speak for Al but my personal political party is the “I DON’T BELIEVE ANY OF YOU” party. Any political references are purely fictional.

Will you be touring and/or releasing any videos to support the album?

Yes and Yes. We are still working out the details for US/European tour dates in 2018, and we have a video set for release soon.

When you want to kick out the jams, what do you listen to?

I “kick out the jams” to AM TALK RADIO. I’m kind of in a music coma. If I am listening to anything, it’s usually when I’m fixing my guitars, and it’s always from the following list: The Live Kinks, The Damned’s Black Album, Dag Nasty’s Four on the Floor and Sgt. Pepper. Those never get old to me.

Disintegrate Me Pre-order at Amazon.