Interview with The Smallest Creature 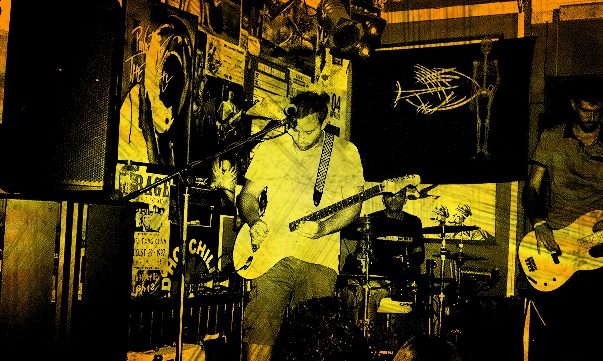 Hiya Stefanos!  It’s so great to touch base with you about your music and find out more about The smallest Creature.  You’ve released your sweeping and engaging alternative rock single “Reboot” on July 30th, the first in a run of songs that will go through the start of October.  You are also preparing for the delivery of your debut album in the near future.  Before we go into those details, can you please list who is in the band and what instruments you play?  Who is the songwriter or do you all share this duty?

Hello! The smallest Creature is Stefanos Marnerides (me) on guitars and vocals, Iacovos Stylianides on drums, and Stephanos Nicolaou on bass.  I wrote all the songs, but they were given shape as we played them together in rehearsals and gigs. Steph and Iacovos put their own respective parts in all of them.

You’re based in Cyprus, but from what I understand, Stefanos, you originated The smallest Creature in the New York City area.  How did this happen and what spurred your move from the US to Cyprus?

I was living in New York at the time and The smallest Creature started off as an alias as I played a few solo gigs and posted some demos online. The move happened when I found a day job in Cyprus and thought it was a good time to get back home.

How did you connect with Iacovos and Stephanos?

We have been friends for forever, from childhood and throughout our teenage years. We had a common friend back then who was writing a lot of songs on the piano, but wanted to turn them into rock tunes with a band. So the three of us got together and, with our other friend on the vocals, we made it happen. We had some really good times with that and bonding musically was effortless, really.

How are preparations going for the release of your debut album?  Have you chosen its title yet?  Will the upcoming singles “Copenhagen” (out August 26th), “Spring” (out September 16th), and “Enchanting” (out October 1st) be on the album?

Yes, the singles will be on the album, which is on the right track to being finished. We’re currently putting some final touches on mixing and are about to move on to mastering. There will be a total of 11 songs on it. It will be called Million.

Why did you decide to release a succession of singles before unveiling your new album?  Did you ever consider offering an EP instead of individual songs?

I thought going with a series of singles would give us some time to build an online fan base, it being a precursor release to the album, and to test the “pipelines” of the digital industry before the whole album comes out. I did think of an EP as an option, but thought that individual songs had a nicer pace and build-up aspect to them.

I’ve been lucky to have an advance listen of some of your songs and I dig them all, especially the tune “Reboot”.  I love how the folk genre verses that incorporate acoustic guitar strum and symphonic strings change to distorted electric guitar flurry on the stirring, rock-oriented chorus sections.  Can you go into your creative process for this song?

I had made a demo of the song before we started playing it and it was a bit different. It started off with the snare drum playing an almost-marching beat before anything else, and then the acoustic guitar and vocals enter. But we dropped that snare and Iacovos had the drums entering where they do now, with that particular groove that leads to the chorus. For adding the symphonic strings, Mellotron to be exact, the credit goes to our engineer, Marios Hadjikos, who had the idea during production. Then I shaped the melodies and added the guitar feedback sounds you hear along with it. The chorus parts are along the more traditional, alt-rock-rich sound.

What is the main theme of “Reboot”?  You sing the lyrics, “open up” and “lay your weapons down”, and I’m wondering if you mean them figuratively, in a relationship sense, or literally, in a response to the pervasive violence that seems to currently engulf the world.

You spot-on touch upon the two-fold way one can perceive the lyrics. When I was writing them, it was initially at an interpersonal level; a sort of conversation with a second person, or even myself, as is often the case. It is about letting go of what holds you back and “rebooting” towards the better, in particular as it concerns human relationships. But as the lyrics were abstract, I could see how they can be interpreted at a social, or even inter-world level, and that’s natural since the social is in a way an integration/extension of the personal. It doesn’t become a means for a political statement though, and stays focused on the underlying personal level.

Where did you record your debut album and who produced, mixed, and mastered it?

The album was recorded in what used to be Fishbone Studios, built right under what used to be the Barrel House Pub in Larnaca. A nice set-up with good acoustics and with the extra benefit of unlimited drinks supply from upstairs.  The recording engineer was Marios Hadjikos and the production and mixing was done by me and him. The full album is not mastered yet, but the singles were mastered by Slavic Selic in TakeAway Studios.

I noticed in the video for “Reboot” that there’s footage of you performing on stage and it looks like there are 4 members in the band.  Do you add personnel to The smallest Creature when playing live?

For a while we had a second guitarist, Pavlos Chrysanthou, who had a very sweet guitar tone and helped a lot as a lead guitarist. We played quite a few shows together, but he moved to a more blues-rock band which was more of his style. Also, my younger brother Demetris accompanied us a few times on the keyboards and even stood in on the bass one time when Steph was abroad.

I’m detecting an admiration for alternative rock bands like Muse and Radiohead in your swirling guitar distortion and yearning vocals.  Do those bands inspire you?  Which other bands/singers catch your interest?

Yes, these bands are definitely two strong influences. I think Radiohead can easily hold a dominant spot in anyone’s musical “education”, in particular if most of your listening comes from the alternative rock era. Same for Muse, who showed up a bit later and, for us in particular, revived a lot of passion for that kind of music. Certainly big inspirations. Overall, we are into things that span quite a few years and sound textures, from Alice in Chains and Stone Temple Pilots, to Eels and Elliott Smith, to PJ Harvey and Tori Amos, to Queens of the Stone Age and Kamchatka, to Kasabian and The Arctic Monkeys, to Black Sabbath and the Beatles. This could be a very long list…

The rousing “Enchanting” rocks out with a propulsive bass, guitar, and drums force.  What brands of instruments do you use?

We mostly used Premier drums with Zildjian and Sabian cymbals, a Fender p-bass with an Ashdown abm 500 evo ii amp, and a Fender Stratocaster guitar with a Laney tube-amp and sometimes a Fender amp.  We also always use direct-to-hardware recording lines too, for digital processing.

On “Spring” there’s a lull near the end of the track where a cello or similar instrument comes to the fore.  Who is playing that?

That would be George Shilling in his studio in North Coltswolds UK, who we got in touch with for this. He is also playing cello on another piece, “Sleep Baby”, that will be on the album.

What is the “Creep” by Radiohead-like “Copenhagen” about?  Do you have ties to this city?

I have a few good friends in Copenhagen and visited there twice - incidentally both times for a Muse concert too.  The song’s pretext is really a bike ride through the city with a girl, within a rather fragile atmosphere in the place between a friendship and an affair, but knowing it will be a friendship in the end.  Now musically, the song started off differently in my mind, with those reminiscent-of- “Creep” chords played for half measures (compared to now) in a Blur’s “Beetlebum”-type groove. Then one time I held the first chord longer and sang the melody on top and that eventually became the song, and we kept it like this. I was aware that it could remind one of “Creep”, but it had evolved into its own song by then and that didn’t bother me.

Where do you all reside in Cyprus and how would you compare you environment to NYC or other cities that you’ve lived in or visited?  Is there an active music scene where you’re located?

We live in Larnaca, a beautiful town by the sea. Compared to NYC or similar cities, it naturally lacks that overwhelming grandness of the big city, but it definitely has its bright side of everything becoming a bit easier to do and of being more pleasant. There is some music/rock scene and it’s constantly evolving; there are more and more shows, venues, and original bands, and surely, like everywhere, there are always kids jamming in their basements and bedrooms.

Will you be touring in support of your album?  If so, what areas will you target?

There are no plans for a tour at the moment, but there will probably be some live shows soon, starting with the local area.