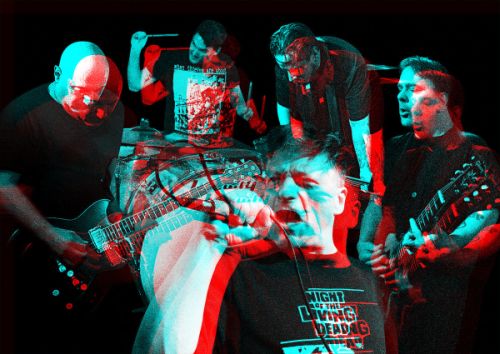 Hackensack, NJ-based punk/metal hybrid band Voice of Doom actually formed way back in the ‘80s out of the remnants of experimental act The Systum. Voice of Doom, with London May (Samhain, Dag Nasty) in tow, released a 4-song EP in 1986, but soon called it quits.

In 2014 the resurrected band dropped a 5-song EP, shedding the metal and focusing on punk music. More music arrived in 2016, 2018, and this year, with Voice of Doom unleashing their debut album, Saint Blaise, some three decades-plus after their inception. The album is a dark, dirty (as in grimy), and dynamic blast of aggressive emotion.

The band have been featured on Alternative Press, Dead Press, The Bad Copy, and more, included in Loudwire Playlist, nominated for the San Diego Music Award Alternative/ Rock Album 2019, and just appeared on the Howard Stern show.

San Deigo-located Jonah Hontos is the creative wizard behind the prog-metal/synthwave/computer game music hybrid project Nyxem. His vibrant and dynamic new album, Behind the Veil of Light, just dropped on May 9th.

Hontos is a master musician, finding a way to simulate metal guitar riffage through the use of synthesizers that are run through high gain amp modeling software. He released the Decompiled EP last year, and his new album soars to even higher and exciting experimental peaks.

Hontos explains that for Behind the Veil of Light, he “increased the number and length of tracks, replacing the in-the-box digital synths with hardware analog ones, updating the synthesized guitar sounds to be heavier and more driving, and increasing the diversity of compositional timbres and textures.” The result is breathtakingly exhilarating.

Official News: “Underneath the pretty facade lies self-destructive lyrical content, instruments that bite each other, and hard emotions that never fade. Secret Shame has never held back from difficult topics or societal downfalls… The gorgeous video for “Dissolve” stars the band and was directed by their compelling frontwoman/visual artist Lena Machina, with cinematography and editing help from Rory Rumfelt.”

Cleveland-based rock act A Killer’s Confession recently bowed their latest single, the passionate “Last Chance,” via Wake Up Music Rocks. Now comes a special quarantine-made music video for the track. The band was founded by longtime metal musician Waylon Reavis in 2016, who is also its frontman.

Official News: “…due to the [quarantine] situation they were not able to come together to shoot this video. The band decided to go DIY and shot this video with handheld cameras and cell phones while sitting at home and respecting the social distancing order. We hope everyone is staying safe.”

Official News: “Unruly Girls is a duo project [comprised of] Luigi Limongelli (drumming, percussion) and Humbert Alison (guitars, bass, synth, piano, voice) [who] work close together in composition, producing, and recording. The band's name was inspired by The Smiths' "Barbarism Begins at Home,” with Morrissey singing: "Unruly boys who will not grow up / must be taken in hand / Unruly girls who will not settle down / they must be taken in hand.” Unruly Girls are ready to share their hallucinatory and raw vision with a brand new world.