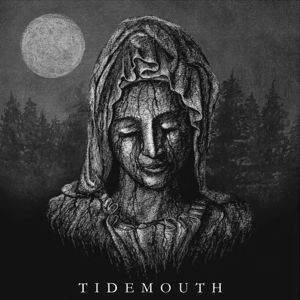 Melotov Records latest release is one that resets the bar once more for the label and the scene at large. June 9th, Melotov releases Velvet and Stone, the new full-length by LA's own Tidemouth.

Tidemouth began life in 2008 as a screamo/grind beast, in line with bands like Orchid and the Three One G Records roster. A collection of demos and one 2010 EP captured this early phase. In 2015 now the band reappears, evolved into something completely new.  Velvet and Stone drips with feeling from the first note to the last. A supremely confident work of art, it is both a gut-wrenching purge and a wonderfully self-aware bit of theater. It is also a masterpiece of minimalism – simplicity is wielded to maximum effect.

On Velvet and Stone, Tidemouth puts forth a  raw, blackened  version of hardcore punk,  in line with current minimalists like Raspberry Bulbs.  Primal drums and eerily warm, almost-clean guitar tones create an unsettling balance of violence and calm. On top of this is painted  a heavy streak of  dark, melodic goth-ness that elevates the music to a whole other place.

The album – bluesy, gothy, brutal, and totally memorable – brings the band's love for classic mopers like Bauhuas, The Cure, and some of the aforementioned LA bands into a new, violent setting.  Every second counts and it is the lack of things as well as the presence of things that makes Velvet and Stone such a knockout.  Kilker states that the band set out to make a "raw, haunting, and heavy" album, and they have succeeded on all counts.

Velvet and Stone was recorded, mixed, and mastered by Jules Leon at Studio E Recording in Simi Valley, CA.  The cover art is by Dylan Garrett Smith.

Bill Wyman of the Rolling Stones to release Album