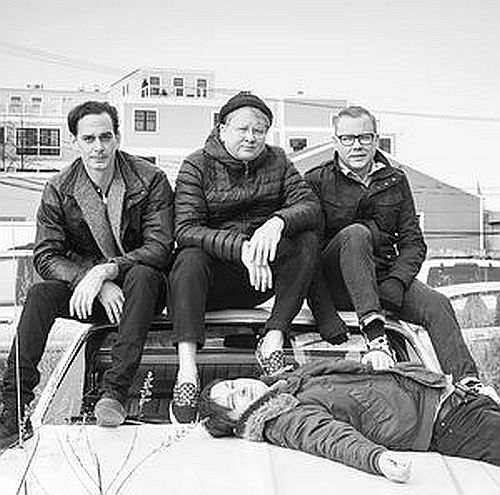 The Boston-based outfit release a rousing and passionate socio-politically-themed LP via Midriff Records.

Eldridge Rodriguez is not a person, but the name of an indie rock/post-punk band located in Boston. Their new album, the socio-politically-themed Slightest of Treason, came out on February 7th via Midriff Records.

Cameron Keiber (guitar, keyboards, vocals), once in indie/punk outfit The Beatings (which just closed up shop in 2019 after running for two decades) and co-owner of Midriff Records, formed Eldridge Rodriguez as a solo music project. It soon expanded, however, into a band that includes his brother and co-owner of Midriff Records, Clayton Keiber (guitar), The Beatings bandmate Dennis Grabowski (drums, percussion), and his brother Dave Grabowski (bass, keyboards).

Slightest of Treason is a vibrant, mostly restless, but at times reflective, and lyrically powerful album that speaks of the times we live in. The songs on the LP range from worn-ragged, but stirring anthemic rockers to wistfully bittersweet Americana to bruising post-punk brooders.

Lyrically, it’s the sound of independent punk spirit that’s down, but not out.  There’s still some fight left, maybe just enough to get us out of the mess we’re in… The band states that they explore, “classic themes such as man vs. nature, religion and race, entitlement vs. theft, willful ignorance, aggressive stupidity, forgiveness, and redemption.”

Slightest of Treason was recorded and mixed by the band at Bluetone Studio in Sommerville, MA, engineered by David Grabowski, and mastered by Jeff Lipton and Maria Rice at Peerless Mastering in Newtonville, MA. Guest artists on the LP include Joe DeGeorge (saxophone) on “Psychic Darts” and Sarah Borges (vocals) on “Your Dead Boyfriend” and “The Last of the Strongmen.”

Song Premiere: “Enough” by So Pretty