Political/Social/Economic Change Starts With You 2 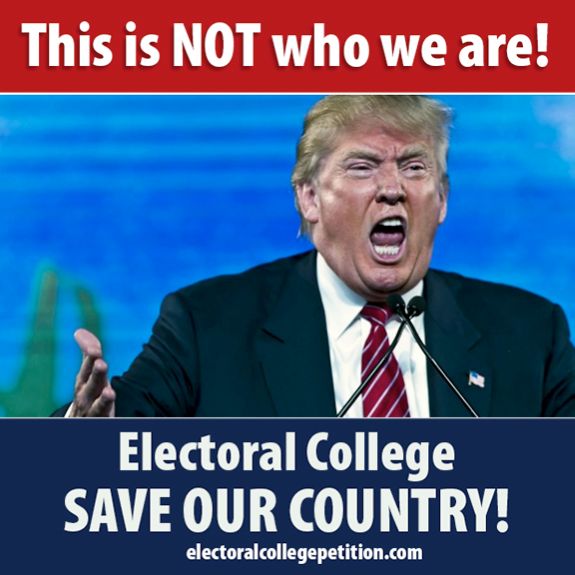 The time for change is now - Take action to stop divisive demagogue Trump from taking US Presidential office.

As I give thanks and celebrate the holiday season in the US, I am also deeply concerned about the future in a personal and general sense. My worries are driven by the unprecedentedly nasty and underhanded US presidential campaign by Donald Trump, his subsequent shocking win, who he is (i.e., what he says, what he does, what he plans to do), and who and what he represents.

I want a "United States"; not a "Divided States". I want a knowledgeable, level-headed, respected, and respectable president who can lead the US, and the world, in a positive, inclusive, and inspiring manner.

Of course I want a president who is tough on terrorism in all its forms, who will abide by and apply the laws, and help to stimulate the economy. But I don't want to put an intolerant dictator in power to do so. I don't want to sacrifice my/our basic human rights to do so.

Since Trump won the Electoral College Vote by slim margins in some states, and Hillary Clinton has over 2.5 million more votes than Trump in the Popular Vote, there has been a continued outcry to recount the votes in those states and to petition the members of the Electoral College to change their votes to Clinton instead of Trump when the members vote on December 19th.

If you feel as I do, please sign, or at least consider signing, the Change.org Petition which details the reasons why Trump should not become president and why Clinton should hold presidential office.
You don't have to register at Change.org in order to sign the Petition; at least that was my experience. You do have to give your name, email address, and I think your zip code. You can have your signature set on private so it is not made public. You will get emails from the creator of the Petition, Daniel Brezenoff, from which you can always unsubscribe if you wish.

Here is the latest news from Brezenoff and supporters of this Petition: STOP TRUMP NOW

Take action and make a positive difference to your and the nation's future!

Here is the link to the original Change.org PETITION
Click on the red, underlined "Read the letter" link to read what is being sent to the members of the Electoral College.

Political/Social/Economic Change Starts with You