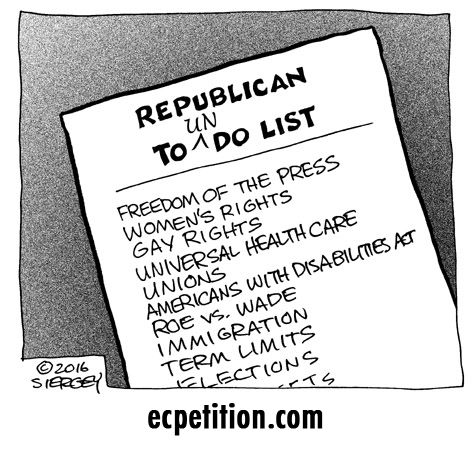 It’s time to take action to stop Trump and his cronies from taking away our now tragically endangered human rights!

Take action to stop Trump and his Republican cronies from undoing all the positive changes made in the US and the world for the past several decades - and remember to use the power of your vote - your voice - to hold on to our human rights!

Trump and the current Republican politicians aren't making America great again (per Trump's inane campaign slogan), they're making America hate again by destroying the United States of America from the inside.  They want to severely limit, or even do away with, laws that protect women's rights, minority rights, LGTB rights, seniors' rights, the environment, food safety, education, and so much more that has already made America great.

At the time of this publication, Republicans in Congress are trying to introduce a bill that will restrict Social Security and Medicare and they also have plans to do away with the Affordable Care Act (universal healthcare) without a substitute plan in place!

Looking back at the 2016 US Presidential Election, the information I've gleaned so far from various online sources is that, out of the 231,556,622 or so eligible voters, only about 123,724,150 (or under 50%) went to the polls and actually voted (These numbers are from a couple weeks ago, so they may be a bit different now).

Many Democrats (blue-collar, Millennials) were cool to Clinton and abstained from voting. Some people voted for other parties besides Democratic and Republican, and even voted for Harambee, the dead gorilla! Restrictive voter ID measures were put in place in certain states which limited access of low-income voters to the polls. Fake news stories against Clinton have circulated on social media and been picked up by certain news sites.  There may have even been voting machine tampering and other manipulation by agents overseas, with President Obama ordering a full review of possible election hacking.

Clinton, however, is winning the Popular Vote, if not the Electoral College Vote, and has continued to accumulate more than 2.5 million votes over Trump (62,523,126 for Clinton so far versus 61,201,031 for Trump; again, numbers are from a couple of weeks ago).

Now states like Michigan, Wisconsin, and Pennsylvania are or might be subject to vote recounts (thanks to the efforts of Jill Stein of the Green Party) due to possible manipulation of the vote. Trump had narrow victories in these states over Clinton.

While all these efforts may be futile in the long-run, it is necessary to not become apathetic to the egregiously detrimental changes that will come under the thumb of a Trump-led presidency.

While Trump's win may have boiled down to economic issues and the (likely erroneous) thought that a businessman with failed businesses and lawsuits against him can build up a robust economy, we must look at the whole picture of his impending presidency, and it isn't pretty.

We must fight to keep our civil and political - and human - rights and not kowtow to a dumbed-down-talking (and, one would assume, -thinking), backwards-looking, extremely narrow-minded, fear-mongering, hate-fueling, insult-spewing, vitriolically ranting, psychopathic behavior-exhibiting, bullying and divisive demagogue and narcissist who is out of touch with, and doesn't care about, the 99%.

As I've written before, if you are for universal healthcare and education, Medicare, Medicaid, Social Security, women's rights, minority rights, environmental rights, human rights, intellectual discourse with respectful (dis)agreements, scientific and mathematical facts and theories, and basic civility and decency, then do what you are able to in order to save these unalienable rights that are now tragically endangered.

One way, which at least will show your support of stopping Trump from becoming President, is to sign the Change.org PETITION for the Electoral College members to change their votes on December 19th and not vote for Donald Trump.