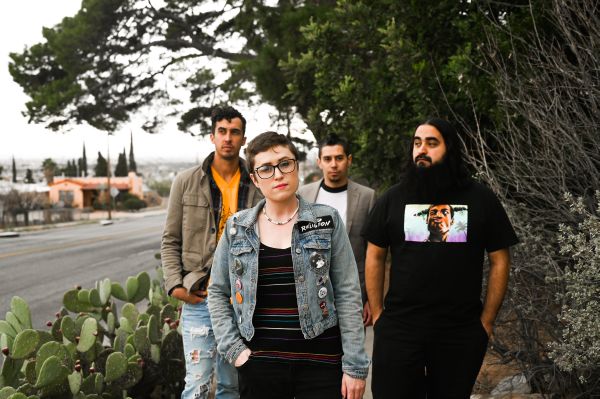 Hailing from El Paso, Texas, acoustic/electric folk-punk band Emily Davis and the Murder Police have gained a cult following in the Southwest with their vibrant and heartfelt music and perceptive and relevant lyrics.

Known as EDMP for short, the outfit recently came off of a tour with punk legends Bad Religion (and Davis toured solo with Bad Religion frontman Greg Graffin in 2017 when he was supporting his Millport LP).

They’ve also opened for alt-rockers Cold War Kids and were gearing up for a tour with renowned rock band Sparta this month (which is on hold due to the virus pandemic).

Davis had been releasing acclaimed solo material from 2010 to 2015, but then decided she wanted to refigure her music into a full-band iteration. In 2017 Emily Davis and the Murder Police had solidified and 2018 saw the release of the album Same Old World.

Incisive, but poetically written lyrics about seeking escape from the everyday through substance abuse are deep and dark, but the sound is dynamic and passionate.

Give me unruly crowds

Give me portions of less

So I'll come back for more

'Cuz I die every night

Just to wake up bored

Spare me the mirror

Spare me one honest friend

With their biting insight

And I die every night.

Evening comes, we seek her out

Swirling her in our mouths

Until the real one comes around

Trade me one ugly truth

For a hundred charming lies

Trade me "are you alright?"

Trading everything I am

For a whim unsatisfied

And I die every night

But for now, we'll settle

For these shallow sips

But for now, we'll bathe

In this manufactured bliss

But for now, postpone

The day while we persist

NEWS: Alt-/post-rock band I Like Trains return on new label and with upcoming LP