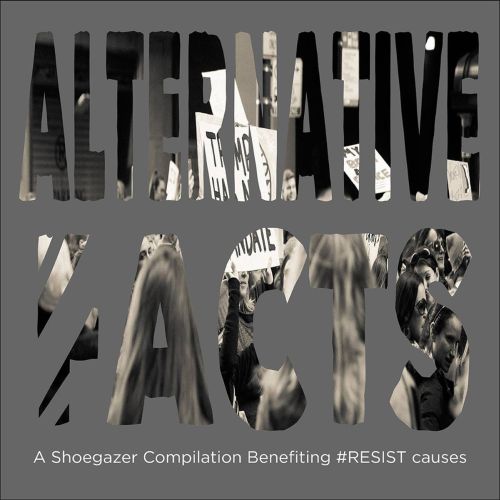 Maddox joins a talented line-up of shoegaze, dream-pop, and alternative music artists lending their voice and sonic vision to the compilation album Alternative Acts (the album’s title is actually Alternative Facts with the letter F crossed out as a kiss-off of the current US President Trump’s and his administration’s use of egregiously false ‘alternative facts’), which comes out March 17th.

The 18-track compilation is the aural offspring of Cory Osborne (Lightfoils, Panda Riot), along with the creativity of dozens of musicians and graphic artists, and is available as the only label issue of Greg Wilson’s DKFM Shoegaze Radio, which is not a record label, but a radio station.

Alternative Acts was born from the shocking (in a supremely horrific way) outcome of the US Presidential election.  The album is a shining light in the fight against the tyranny, lies, hate, and fear that is being pushed by divisive demagogue Donald Trump and the extremists in the Republican Party.

The artists involved with Alternative Acts support civil rights, human rights, and women’s health, among other essential causes.  All proceeds from the album’s sale will be evenly split between Planned Parenthood and the American Civil Liberties Union.

Maddox explores new sounds and styles as AEVE CVE without losing any of his signature intensity and isolationism that marks his work with Bloody Knives and his collaborative act S T  F U with Dean Garcia (Curve, SPC ECO, M A D).

“Glassrain” is an exclusive track made especially for Alternative Acts and it’s an outright stunner and wild standout among the more traditional shoegaze and dream-pop/rock numbers on the album.

On “Glassrain” Maddox plunges into a frenetic drum ‘n’ bass tempo, menacing stabs of growling synths, and a spiral frenzy of buzzing electronic notes.  Sudden calmer, but detached passages arrive and float by on Maddox’s extended, emotionally disembodied vocals, both wordless and with lyrics, and sustained funeral organ push.

It’s surprising, unlike anything from Bloody Knives or S T F U - and completely addictive.

Bloody Knives just dropped "The Descent" on limited edition blood red liquid-filled lathe-cut 7" vinyl.  The band will be releasing its next album, White Light Black Moon, this year, a follow-up to the heart-stopping sonic crusher I Will Cut Your Heart Out For This.
Bloody Knives at Saint Marie Records