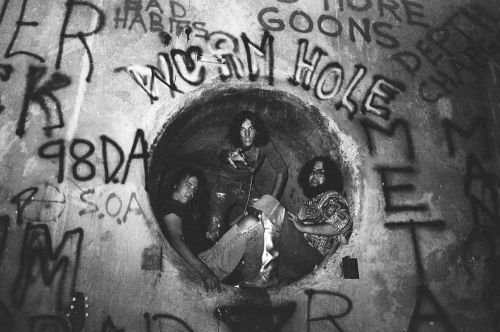 Every legendary band has a musical past, usually with its members toiling away in previous outfits before hitting it big. And sometimes those prior acts gain acclaim in retrospect, viewed from the long lens of musical history, and are minted as progenitors of an influential sound.

Such is the case with Black Flag and Würm.

Würm was a sludge metal band that was founded in 1973 by bass player Chuck Dukowski who would later join Black Flag. Without the sonic foundation of Würm, the genres of punk rock and hardcore would have sounded much different.

The members of the SoCal-based Würm would practice in their Würmhole space, a Hermosa Beach hangout for musicians during the mid- to late-‘70s. It’s where Dukowski first met Keith Morris and Greg Ginn, before they kick-started the original line-up of Black Flag.

Würm only released one album, 1985’s bass-driven Feast via SST Records, and it came out after the band had broken up. Now, with the help of Dukowski himself, the out-of-print LP is being reissued via Org Music, along with a second record that features unreleased tracks, demos, and more.

Rebel Noise is psyched to host the premiere of the rad demo track for “Guitar”, which is not from the Feast, but appears on Side D of Exhumed. The demos are all rough cuts from back in the day, but “Guitar” still shines with a raw and gritty power. Sing-song, shouted vocals and unbridled howls are unleashed amid the bass line grind, a jagged-edge guitar riff, and bashed out drum beat. Midway through the tune, the tempo becomes faster and the guitar reverberates into psychedelic rock territory.