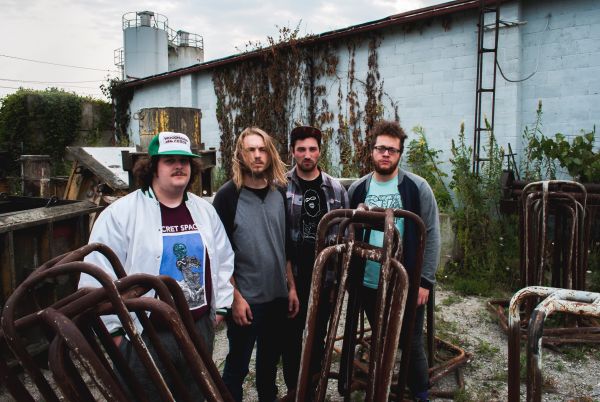 Ohioan alternative rock band American Spirits lights it up on a dynamic and cathartic track off its upcoming EP.

The story of American Spirits is familiar, four friends meeting in a garage in Bowling Green, Ohio to combine their respective passions for music and hanging out. What they didn’t know, during those first practices in the spring of 2017, is that the band would be met with unstoppable enthusiasm from their friends and community, and the garage would become The Summit Shack, a DIY show venue that has hosted over 25 bands during its six-month lifespan.

With a record slated for release on February 23rd, American Spirits are gearing up for a summer tour to debut the EP, titled Nowhere Near Perfect to brand new ears and bring their electric, emotionally driven songs to more audiences.

A standard week for the band consists of two shows and several practice days. Using The Summit Shack as a practice space, the garage boys lock in their sets for any upcoming shows, and are also constantly creating and refining new music. Their practices are rarely private - Conor and Trey live with friends in the house attached to The Summit Shack. Bails, Dillon, and more friends of the band live a short walk away. People come and go as they please, hanging out and enjoying the sweet sounds of the American Spirits’ self-described “cigarette dad rock.”

While making music is the band’s primary focus, their favorite moments come from being able to present their hometown with shows and events at The Summit Shack. Bowling Green is a small town and music venues are scarce. By literally opening up their home to the public, American Spirits have created a place for all their pals to relax, have a good time, and appreciate the abundance of local talent. They find this to be incredibly rewarding and are so happy to have this unique space to share.

Rebel Noise has the premiere of a track off the EP, tongue-in-cheek titled, reflective to dynamic “So Much Time Has Pabst.”  Choppy waves of guitar and kinetic drum beats alternate with calmer passages, while vocals are contemplative to exclaimed – and then the song kicks into a higher gear in its last passage with the verse, chorus, verse structure breaking down into a chorus drowning in cathartic chants.

Dillon explains, ““So Much Time Has Pabst” actually started off as two different songs, with lyrics contributed by me and Trey that were vastly different and we wanted to portray that sonically.  I wanted the song to feel like an on-again, off-again relationship, where sometimes you feel like you would do anything for that person, but other times you can’t bear to see their face.”