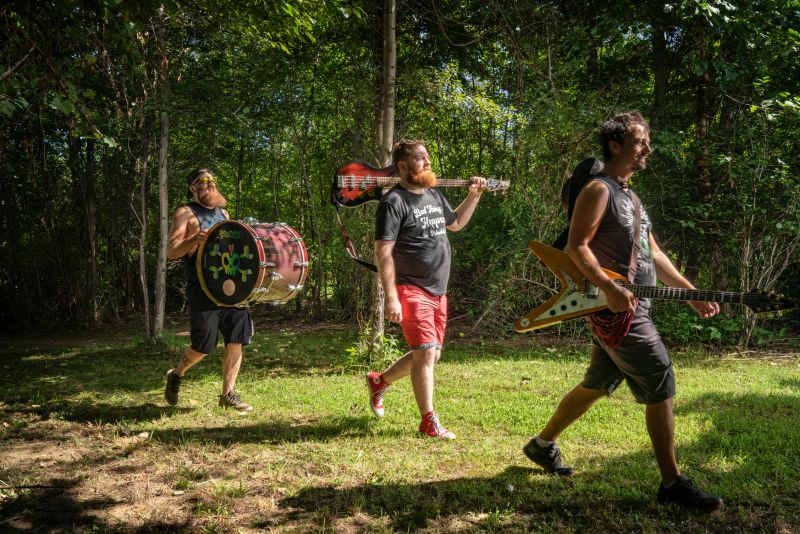 They’ll be releasing their second album, Play For Keeps, on October 16th. It follows up debut LP Hold Your Ground, which came out in 2017.

The core of the group was formed in 2011 by seasoned punk rock musicians Matt Charles (guitar) and Tim Fairchild (drums), and they’re joined more recently by Colin Lubinski on bass.

Fairchild and Lubinski bring together a lively rhythmic section, while Charles provides the rock guitar firepower. Play For Keeps runs from punk to ska to thrash without missing a beat.

Rebel Noise is stoked to host the premiere of the fun(ny) music video for “New Reality,” a lyrically trenchant cut from the upcoming record.

“New Reality” is a dynamic and catchy ska-punk tune filled with a jumpin’ tempo, gritty guitar riffs, lunging bass line, brief blasts of bright horns courtesy of Tyler Dold, agitated percussion, pronounced drum strikes, and emphatic and defiant exclamations about holding on to your self-identity and beliefs, and not being a passive sheep being devoured by the devious wolves in life.

So take a stand and “Don’t wait for the world to change /… It’s time to take back your own mind.”

The music video, which was directed by Charles Cerrone, is a rad blast that’s part band performance and part silly storyteller.

The narrative is a madcap and high-energy adventure of the band being kidnapped by bandits and other hijinks, like them playing the track while crammed in the getaway van. Take a look at the frantic and hilarious antics below:

Charles kindly took part in a Q&A interview that covers all the musical bases:

Why do you think ska is experiencing a revival now? What drew you to add that influence into the songs on Play For Keeps?

Well, in short, ska is good, fun music and has never completely faded out.  I remember when ska was huge and we were inundated with tons of ska bands, and I also remember it made sense that the craze had died out for several years.  It was due for a revival.  Tim and I had both played in bands in the past that had incorporated ska into our music.  We had never dived into ska, but with the addition of Colin on bass a few years back we finally had somebody else on board!  I made a guarantee at practice one day that I would write a ska song for Assemble.  Eventually I came up with the couple of songs we put on the album.

Our rapidly changing, insane world in which we live in gave me inspiration for the lyrical content.  Or more accurately, the way people react to our quickly changing world is the true inspiration.  One of the things that always appealed to me about punk rock was its anti-authoritarian stance.  You are not supposed to take anything for granted, question everything, especially people trying to tell you what to do and how to live your life!  Those are morals and values, turned into mantras that have stuck with me throughout my life, and that I'm emphasizing in “New Reality.”

Who are some of your biggest influences in the punk genre?

I mean, of all-time?  As a kid it was the Ramones, Sonic Youth, Black Flag, all the classics.  Then I discovered The Descendents, “Milo Goes To College,” which was a huge influence on me.  I could go on.  Tim says, “besides getting mix tapes and skateboarding with friends I’d have to say NOFX and Blink 182,” Colin says, “Teenage Bottle Rocket and The Wonder Years.”  I have to agree with Tim, getting punk mixtapes was the best, and NOFX being a big influence.  I am also a fan of Teenage Bottle Rocket, but a much bigger fan of The Lillingtons!

The skaters in Philly are amazing.  All you have to do is look at FDR skatepark to see what they built all by themselves.  Incredibly tight community and there are tons of great spots to skate.  Lots of hidden gems. It seems like there is always a DIY punk show happening at a Philly skatepark.

What’s next after Play for Keeps? Where can listeners expect to find you?

Well, we can finally focus on playing some shows after Play For Keeps!  These past few months we've really been working hard putting all the pieces together so that we can get this released!  Hopefully tour in the near future?  The last tour we booked was completely cancelled at the start of Covid, so we are anxious to get back on the road.  People can listen to us on Spotify, Apple Music, and all other streaming platforms.  They can find all of our music and tour dates at http://assembletheband.bandcamp.com.