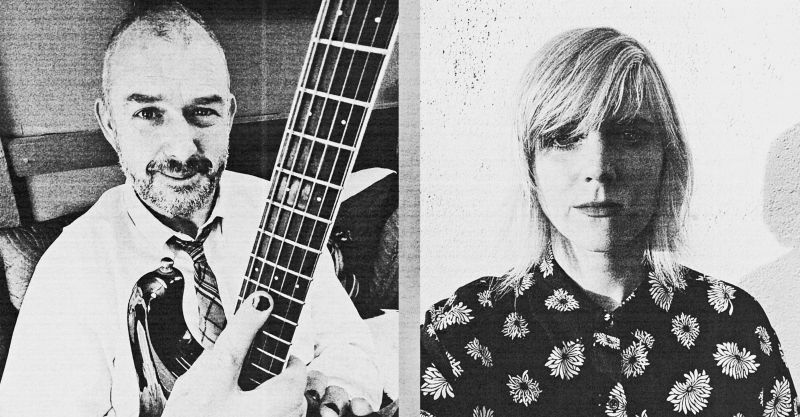 Right or Wrong precedes the release of a 14-song album titled Assuaged that will come out this summer, and the tracks on the EP are extras and won’t be featured on the upcoming vinyl LP.

True to Boyracer’s trademark DIY aesthetics, the total batch of 20 compositions were recorded over the past six months or so, and are dropping on the band’s Emotional Response record label.

Right or Wrong houses “S.A.E.s,” as well as three other original tracks and two covers; one of the Breeders’ “No Aloha”) and the other for New Order’s “Temptation”.

Based out of Arizona now, but with a long and intercontinental history (and with previous output on Slumberland and Sarah Records), the current lineup of Boyracer is founder Stewart Anderson, newer recruit Christina Riley (Burnt Palms, Artsick), and original band member Matty Green.

Boyracer hit the gas in 1991 and are celebrating their 30-year anniversary now as a band.

Rebel Noise is stoked to partake in the party by hosting the premiere of the music video for the catchy, gritty, and punk-spirited “S.A.E.s,” which features Laura Bridge (Kicker, Hood, Harper Lee).

On this specific indie rock number Anderson is on vocals, 12 string guitar, and drums, Riley is on vocals and bass, and Bridge contributes guitar with feedback.

“S.A.E.s.” is a socially relevant and nostalgic look back at communication before supposed ‘smart’phones and texting took over the world and dumbed us down.

In the past we had to take time to use our brains, compose thoughtful messages, and send them via letters through the postal system.

Now everything is super-quick and too easy, with not much thought is involved in sending our mentally garbled, misspelled/grammatically incorrect ‘texts’ of limited wordage…

Riley directed the music video which is shot from the first-person perspective. The viewer follows Bridge putting her note into an envelope addressed to Boyracer and driving to the post office with the envelope on the dashboard of her car.

She sends the letter off at the post office box, and after a brief fade-to-black the video comes back, but this time at the recipient’s mailbox, with a hand getting the letter out of the box…

Anderson explains the throwback meaning of the title, stating, ““S.A.E.s [is] short for ‘Stamped Addressed Envelopes,’ recalling the pre-internet days of indiedom when you would literally stick a stamp on an envelope to ensure a response from an impoverished indie band. Not to mention I.R.C.s (International Reply Coupons), which were very exciting!”