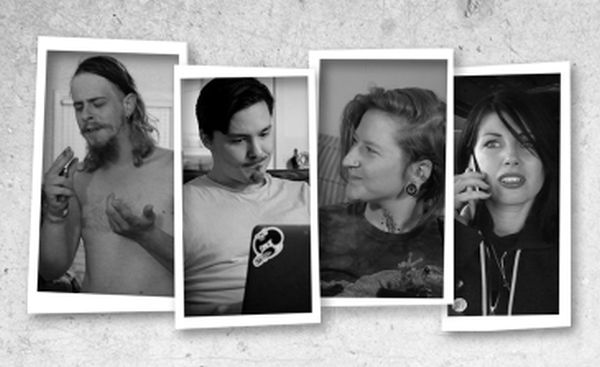 This month Shibby Pictures has been rolling out a new web series called Good Ol’ Punx, a 6-episode comedic look at the lives of punx and the punk music scene (starring local bands and their pals).

DIY bands of all stripes and their fans will find something to commiserate over with a wry chuckle or loud guffaw in these short sketches, from getting ready for a show (No, now is not the time to light up, or take your monthly shower!) to driving to the venue and much more.

As Shibby Pictures puts it at YouTube, “Good Ol’ Punx is a web series centered around the common struggles associated with being part of the DIY music scene. From the absurd chaos of simply getting punx out of the house, to the… challenging reality of tour vans, Good Ol’ Punx is a gritty rollercoaster ride through the highs and lows of the underground.”

Rebel Noise is tickled black ‘n’ spiky to be hosting the premiere of When’s the Show?, episode 6 of Good Ol’ Punx. It caps off the series in eye-rolling, d’oh! fashion as two fans (played by Katie Goodson, and Mike Nielson who’s in the bands Nostalgianoid and Hug)  hatch a plan to catch their fave band at a show…

The pair digress casually on their comfy couch, figuring out their schedule in minute detail, rambling on while lighting up and zoning out. The takeaway message that, “More people need to go to shows!” totally and amusingly ends up being lost on them…

Kerley comments, “To close it out, this episode is people getting ready to go to the actual show. And in typical punx fashion, they find every reason in the world to delay going to the show. [It’s] framed in the same style as episodes of [the TV series] 24 - a juxtaposition I had fun with because of their resistance to taking action.”

Check it out below and stick around for the other 5 episodes:

Kerley/Shibby Pictures’ most recent work is the filming of the music video for “Toothache” by Apes Of The State:

Song Premiere: “The Roanoke Colony Zombies” by Phantom vs Fire

Song Premiere: “Enough” by So Pretty