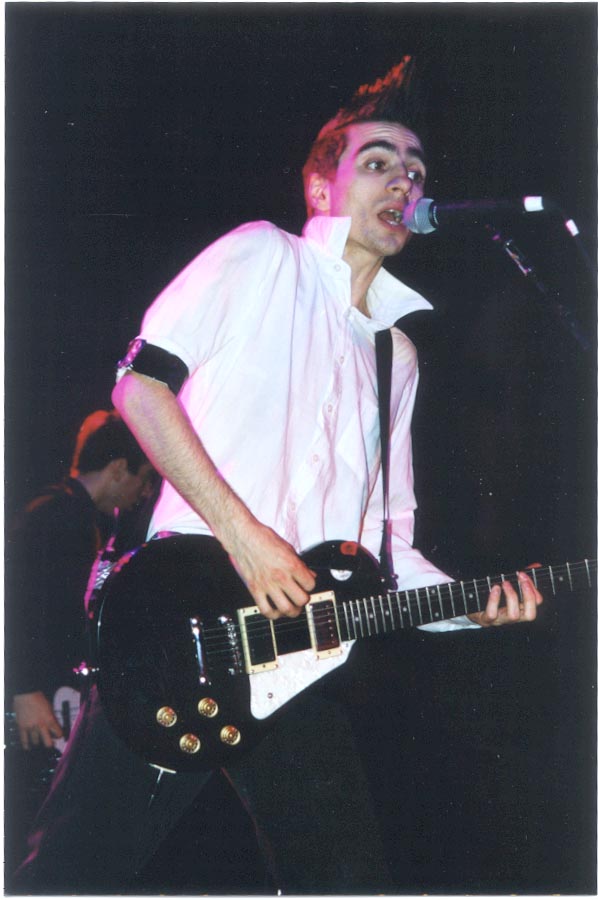 An early Fourth of July treat - Anti-Flag and the most flag-waving, mindlessly nationalistic and patriotic holiday of the year - more like a paradox. In any case, on this hot and humid night in NYC, the full-capacity crowd at Irving Plaza bore witness to punk's most politically-charged and sincere bands. If ever there was a bunch of punks who thought they could change the world - or at least the kids' at their shows minds - it is Anti-Flag. Love 'em or hate 'em, you have to admit they genuinely care about the world, the political climate, human rights, and the fate of all mankind. Along with Tabula Rasa, another thought-provoking band Darkest Hour, and A Static Lullaby, the kids of NYC experienced a bevy of different styles of music, from metal to indie/emo-tinged post-punk.

First up were fellow Pittsburgh natives Tabula Rasa, who played material off their new record, "The Role of Smith," conveniently released on Anti-Flag's label, A-F Records. They play a pretty impressive upbeat indie/emotional post-punk hybrid that the crowd seemed to get into. Their last two offerings were by far the hardest of the set and they had a good stage presence.

Next to take the stage was Darkest Hour, a five-piece out of VA. It was a little puzzling as to how this metallic hardcore band hooked up with Anti-Flag, as they're rather disparate musically. Frontman John Henry promptly thanked the crowd for being open to different types of music. But, with such a strong politically-minded record in "Hidden Hands of a Sadist Nation," the band's second LP on Victory and third over all, everything clicked. These guys could very well be the metal version of Anti-Flag, with songs like "The Sadist Nation" - their first offering of the night and the first track off the album - which features bold lyrics like "One nation under the gun/Where forward thinking is shunned" and the very A-F friendly lines "So put your blinders on /Replace your conscience with a flag/So you can forget money runs thicker than blood" from "Marching to the Killing Machine," a song all about mindless nationalism. Like Anti-Flag, Darkest Hour exposes society's injustices and offers a different point of view than that of the accepted norm.

Onstage, Darkest Hour is full of energy, with guitarists Kris Norris and Mike Schleibaum, bassist Paul Burnette, and vocalist John Henry jumping all over the place while drummer Ryan Parrish manically pounds his drums and tries to keep some order. At times we got some posing from the guitarists, as they played in synchronized, fashion. Yet, the crowd didn't match the band in enthusiasm, as they never fully heeded Darkest Hour's call to form circle pits at crucial points during the set. The music is intense and hard as hell, highlighted by Henry's screamed vocals. During the closing number, the frontman even brought the snare drum out into the crowd, pounding out the beat while the rest of the band played on, making for a nice, dramatic finish to a powerful set.

I don't know, I had heard of A Static Lullaby, but had never heard anything by them. But, when I witnessed the crowd's reaction when they kicked off their set, it was apparent these guys have quite a following and, I guess, are the new flavor of the week. They play generic screamo or emo-core - whatever it's known as - that brings to mind other radio-friendly favorites like Finch, whom all the young'uns seem to love nowadays. We got a taste of their debut "…And Don't Forget to Breath," including "We Go to Eleven," "Withered," "A Sip of Wine Chased with Cyanide" and the closer, "The Shooting Star that Destroyed Us." Believe you me, there was not a dry eye in the house - well, not really - but I had to stifle some laughter when the vocalist said mid-set that he felt like he was going to cry. Why? Well, because it was the band's first time playing NYC, of course. Ample pounding of his heart with his fist and screamed, emotional vocals from this sensitive soul is what was left in my mind…

Ah, and so it was time for Anti-Flag to take the stage. The anticipation in the room was oppressive. A random spotting of bassist/vocalist Chris #2 onstage elicited screams of joy. When the band finally did come out, they ripped into one of their finest compositions, "No Borders, No Nations" from their split with the Bouncing Souls. Anti-Flag played a nice mix of songs from all their records: we got the classics from their debut record, including "Fuck Police Brutality" and absolute fan favorite "You've Got to Die for the Government," to which everyone was singing along. And amidst other greats like "Got the Numbers" and "Tearing Everyone Down" from 1999's "A New Kind of Army" and "This Machine Kills Fascists" and "Angry, Young, and Poor" off "Underground Network," were two new offerings that will appear on their record due out later this year. One was preceded by the usual Anti-Flag show rant, this time in the form of President Bush's incomprehensible tax-cut that'll only benefit the top 2% of the populace, as Chris #2 deemed Bush "a killer," "a liar," and "a fucking thief." The second song, entitled "Fuck the Flag and Fuck You," is one Chris #2 predicts "will blow Britney Spears off the charts." About the song's title, he put it in context, explaining that when an SUV with a "These Colors Don't Run" sticker cuts you off, you say, "Fuck the Flag and Fuck You." Brilliant.

However, the politically saturated atmosphere was alleviated a bit with their light-hearted "Spaz's Destruction Party," only to be followed by the fiery "Watch the Right." Later, upon returning for the encore, the band cranked out "White Riot," a nice tribute to the late great Joe Strummer, a man who brought politics and rock 'n' roll together, and ended with "911 for Peace," which left chants of "I don't wanna die/I don't wanna kill/I don't wanna kill/I don't wanna die/We all are human, let's start to prove it" resounding throughout the room. But the political street punk is what these boys are about - they do a good job of spreading their incendiary messages wherever they play, and surely, look to incite kids to action and show that there is an alternate way of thinking. As aforementioned, interspersed with the songs were the inevitable rants form co-frontmen Justin Sane and Chris #2, discussing Bush, taxes, lack of weapons of mass destruction in Iraq and how Bush should be impeached for leading us to war with this false pretense, etc. Hey, but punk IS political, and sharing ideas via music is, after all, what it's all about.