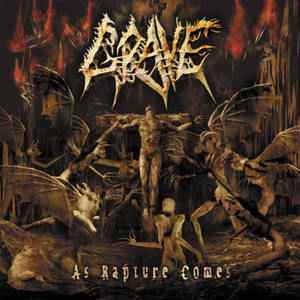 Album Review
Grave
Label: Century Media Records
Reviewed by thebronx
Grave are one of, as most of you know the "PIONEERS OF SWEEDISH DEATH METAL" well there back with their sixth astounding display of hate. As rapture Comes was recorded in Studio Soulless and we are willing to be the studio will never be the same after having Grave put out a record there. The band again turns to Peter Tagtgren to record this album.

As you can see, Grave have always stayed true to what they set out to do; which seems to be pretty much making your ears throb. This album takes soul grinding riffs and throat sinking vocals and creates something great. Covering "Them Bones" which you may know as an Alice in Chains cover along with their own gut wrenching music Grave took this album above and beyond anyone's expectations. The cover of Alice In Chains actually was better then the original but seems to me that Grave took nothing for granted because this album will rip you a new asshole if you don't watch out.

Maybe it is the fast paced guitars or throbbing drumbeats that makes Grave who they are today but whatever it is they certainly haven't changed. As Rapture Comes will be rolling into stores July 25, 2006 and I suggest you buy it because loyal and new fans will not be let down by this. Even if they did cover Alice In Chains, all ten tracks of this album are synced well and well done.