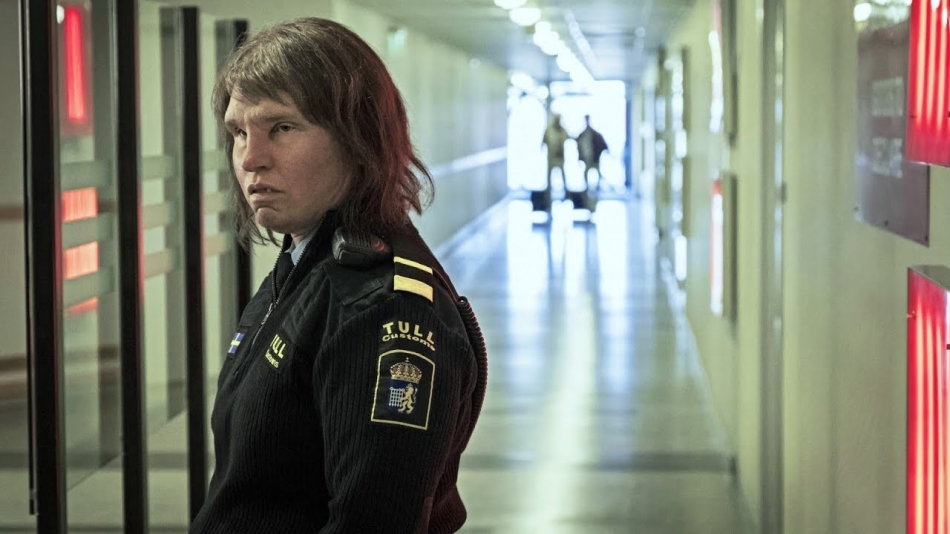 Unraveling thematic questions of isolation and outsider status, director Ali Abbasi's sophomore film Border is less a rigid portrayal of what it means to be a specific kind of minority and more to do with the persistence of loneliness that comes with being rejected from one's immediate community. Based on a novel by Let the Right One In's John Ajvide Lindqvist, Border encapsulates Scandinavian folkloric elements as we're introduced to Tina (Eva Melander), a border guard who has a supernatural talent for sniffing out contraband. A quiet and stoic individual, Tina's genetic makeup gives her a heavy brow and squat features and more often than not she resides within her own company, her only interactions seeming to be with her co-worker, her father suffering from dementia and her live-in boyfriend who finds more entertainment in his three Rottweilers and a TV screen. Upon meeting Vore (Eero Milonoff) while at work, the two revel in their unique physicalities and similarities in their life experiences as a curiosity and attraction spark between them. Abbasi's Border ventures on a multitude of genre-bending paths, providing a unique vision to its audience but arguably losing its consistency throughout the film.

Abbasi pays careful attention with rendering Tina into something not quite human. The prosthetics used to create an ill-favored appearance and her immediate capability in sniffing out not only traveling smugglers' goods but also their emotional guilt and shame put her on par with a wild animal's knack for using their sense of smell to navigate the world. From the subtle turns and flinching of her lips to her studying gaze at those around her, Tina seems to have more in common with the deer and foxes surrounding her house in the woods than she does with the general population. Her interactions with Vore also elicit these natural instincts within her, taking delight in giving up refrigerated food in exchange for meals of maggots and the carnal excitement they spur within each other after years of sexual isolation. Their repression from society and the secrets Vore reveals to Tina about her identity and her past simultaneously brings them closer together and segregates them, posing the question of whether sustaining a life solely between others identical to them is the answer to their alienation.

Putting forth her trust in Vore, Tina gradually begins to come out of her shell as she questions her background and throws out prior relationships, threatening her father while he's in the hospital and kicking her roommate out in favor of Vore's safety and comfort in her home. Vore's life outlook is one in shades of black and white, strictly adhering to the principle that all humans are evil and admonishing them is necessary in order for goodness to arise. A voyeuristic depiction on those whose physical appearance doesn't adhere to the majority, there is much to be gained from Border's quiet observation into themes of loneliness and society's rejection of those that differ from the norm. However with the introduction of  moral statements and delving into supernatural territory, the film unfortunately loses its strength in revealing more than it needs to and stretching its cohesiveness thin by jumping into a vast array of ideas before fully forming them.