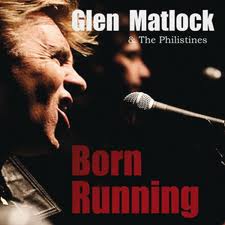 Album Review
Glen Matlock & the Philistines
Label: Stomp Records
Reviewed by ChrisK
Glen Matlock has been dubbed one of the most respected, if underrated British Musicians. His career has spanned over thirty years. He was the original bass player with the Sex Pistols (later to return and play on the several recent reunion tours), helped to form the infamous Rich Kids, worked with Iggy Pop, the Damned, and Robert Gordon to name only a few of many accomplishments. He is recognized as one of the few remaining members of the original School of '76 Brit Punk Rockers.

Glen Matlock and the Philistines newest offering is a 12 track disc of solid punk n roll named "Born Running". The 45 minute disc is solid from start to finish and touches on issues such as mortality (Born Running), working hard to achieve your dreams (Hard Work), burning out (Timebomb), love and romance (Rock Chick), and everything in between (Something Tells Me, Yeah Riot, Nowheresville, etc).

At 54 years of age, "Born Running" proves that Glen Matlock can still hold his own. The album is an easy option to replay again and again without fear of becoming too tired of it. The songs vary in style and are reminiscent of Bob Mould, Social Distortion, The Gaslight Anthem, and The Damned. It's not too snobby and not too punk rock so for everyone expecting to hear an extension of Nevermind the Bullocks, you'll be disappointed. For everyone else, this disc is highly recommended and there is something for everyone, whether your preference is punk, rock, indie, etc.

From the SGV… to Boyle Heights