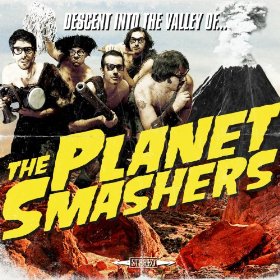 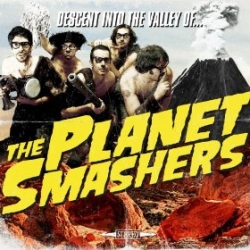 It’s been six years since the Planet Smashers released Unstoppable in 2005. Such a long hiatus between records usually results in a release so far from the last in terms of sound and style that most longtime fans don’t even notice it. Fortunately for the Planet Smashers, their newest offering Descent Into The Valley Of… picks up exactly where Unstoppable left off.

To fully understand the prehistoric theme of the album and artwork would be impossible without a noted explanation from the band on their whereabouts: A late-night audio experiment in the recording studio resulted in a randomly generated interdimensional time-space vortex that teleported the Smashers 65 million years into the past. The explanation proceeds to explain the band become trapped in the ice age, frozen and recently discovered.

Inspired by prehistoric dinosaur attacks, volcanoes and reptiles, Descent Into The Valley Of… is 15 tracks of party-themed ska that ranges all styles – from the hilariously addictive tom-foolery of “The Hippopotamus” to the darkly brooding “Die Tomorrow” to the punk rock insanity of “Food Fight” to the touching love song “My Obsession”, this album delivers something for everyone while maintaining the Smashers’ signature sound that has made them an international sensation for over 17 years.

See You In Hell