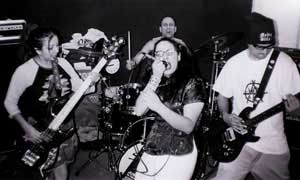 I'll just give you the don't get mad if you sucked' version. Actually, nobody really sucked at this show. Some bands had the audience going and some just made me yawn. But hey, you gotta start somewhere, but speaking in contradict, I haven't had this much fun at a show since I saw ........... mmmmmmmmmmmm ????????????? Well anyway, first up were a band from san diego 'NOISEGOD'. With four chicks and one dick, this five piece band actually warmed up all the drunks in there. There sound, I might say, hardcore with a just bit of a metal edge. I got no more to say but i give this band one and one-half thumbs up.

Second band!! and i'm not shittin' you, was a band called 'MEDIA BLITZ' from east L.A. The house starts shaking now, and the ants start crawling up my ass. Either people in San Diego like L.A. bands, or 'MEDIA BLITZ' just put on a good show. That singer was on some type of speed because she was just on this intense energy; as she pours the pitcher of beer over her head, she's screaming her lungs out and all I could understand were words like nympho, feel me, fuck, what are you looking at you stupid idiot (she's telling this to some skinhead. he actually liked it too). This band had everyone not only enjoying what I feel was the old school edge of hardcore punk rock & roll with a razor tight sound, but they had everyone cracking up. two thumbs up!!!!!!!!!!!!!

Third up was a band, I believe, from somewhere up north 'THE PROCESS'. They also put on a good show, and I believe they were on tour. At first, I thought they were aliens from outer space because they were all bald, but musically I thought they definitely had that hard-edged hardcore punk thing working. Even though they all looked the same, maybe they're all twins, I actually enjoyed watching them. Two thumbs up!!!!!!!!!!!! Just next time, move around the stage a little more.

Last up was 'THE RATZ' from Oregon (up north too). What a night of liquor and punk rock. Now I'm really toasted. Shall I start?? - A young bunch of kids who had their shit down and tight, yet nothing original or ground breaking here but the crowd certainly liked them. These guys were also on tour. I think everyone's drunk now. Music sounds so much better when I'm drunk. Well fuck it, they kicked ass and if they're back in town I'll definitely go watch them. Two thumbs up, I guess.!!!!!!!!!!!!!