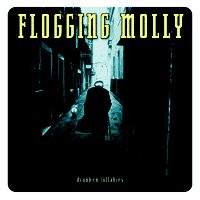 Album Review
Flogging Molly
Label: SideOneDummy Records
Reviewed by Andre Lozoya
This one's hard for me to review without those damned Pogues images coming up in my head. I happen to absolutely love the Pogues and Mr. MacGowen's antics and songwriting so I'll have to step aside from those easy references.

Starting off the album is a great song Drunken Lullabies with a mid-tempo punk rant. What this song is about I have no idea but I like it. Other great songs from the CD are: If I Ever Leave This World Alive, Rebels of the Sacred Heart, and The Rare Ould Times. Violins, accordian, and mandolin never sounded better next to Marshall half stacks and electric guitars. The one exception I take to the CD is the song, Another Bag of Bricks, which sounds suspiciously like the Pogue's Turkish Song Of The Damned, but I said I wouldn't do that. Punk meets Irish traditional music in the pub with attitude and grace. Buy this one and you won't regret it.