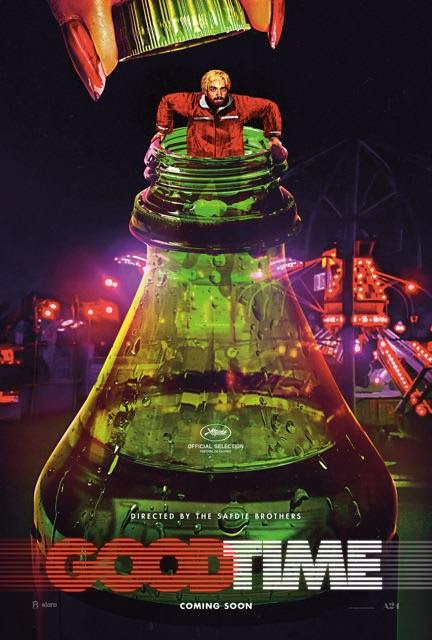 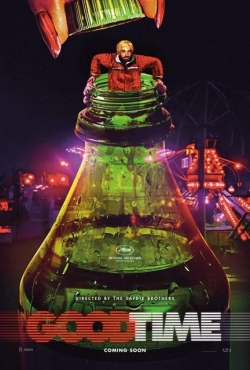 New York based brothers and filmmakers Benny and Josh Safdie (Heaven Knows What, Daddy Longlegs) dredge up the underbelly of their city with their latest crime/thriller collaboration for Good Time. Committed to a tense and pulsating pace until the credits roll, the film opens with brothers Nick Nikas (played by Benny Safdie) undergoing a therapy assessment for a mental handicap with Connie (Robert Pattinson) rescuing him from what he believes to be a sterile and detrimental environment. What swiftly results is a failed bank robbery heist, landing Nick in Rikers Island and Connie with a mission to break his brother free from his confines. As the night wears on an accumulation of poor choices and frenzied situations only seem to lead Connie further astray from his good intentions to save his brother from society’s failed institutions. While the film remains an overwhelming visceral punch to the senses, the film also adheres to a deeper political nerve to the dangers of today’s modern world.

For the near 100-minute run of Good Time, the Safdie brothers provide no relief or respite from the film’s constant anxious-ridden course. Spanning facial close-ups and dizzying camera movements, Robert Pattinson’s role as Connie Nikas serves as an anti-hero, constantly on the run attempting to do good but often using innocent characters and bystanders as a means of putting his needs first. From the woman they rob at the bank to the elderly lady and her daughter Crystal (Taliah Webster) whose apartment he seeks refuge in after an attempt to get his brother out of the hospital, Connie resorts to decisions and actions that ultimately (and selfishly) get him ahead. The Safdie brothers weave a complex thread of racial issues throughout their film, depicting the many Black individuals that Connie encounters as merely getting in the way of his selfish tendencies, yet each individual remains pure with their intentions to give and provide help rather than receive. Set in a pre-gentrified, gritty New York, the directors sought out iconic people rather than stately buildings, embarking on a folkloric tour of the city’s local legends to help build Pattinson’s character into a layered and intricate one. The Safdie’s refusal to directly lay out the Nikas brothers’ past experiences and scant dialogue compel the viewer to read subtle gestures and cues, an intensity in the eyes or an initial hesitation to trust others in a simple group therapy game.

The soundtrack is easily worthy of a separate essay alone, a remarkable synchronization to the film’s rushing and erratic energy. Daniel Lopatin of Oneohtrix Point Never’s synthscapes are filled with futuristic textures, claustrophobic and occasionally overwhelming and permeating the sparse dialogue in the film. The final track “The Pure and the Damned” featuring Iggy Pop is a sparse and deliberate ballad, paired with the film’s thoughtful closure, painting an intangible location “where we can do everything we want to / and pet the crocodiles”. Iggy’s throaty spoken word illustrating a life unbound from shackles and looking ahead at a clear sky is stunted by the lyrics’ certainty of never arriving to that point, “but it’s a nice dream, it’s a nice dream”. As affective as Good Time is on the immediate senses, the film’s substance seems to get overwritten by the consistent chaos and relenting action. Its brief subtlety in its flashback of Nick’s experience at his therapy sessions holds a significant poignancy which the majority of the film feels somewhat lacking without. Perhaps with a second viewing it would allow for a greater appreciation and balance of the film’s more understated and significant message.