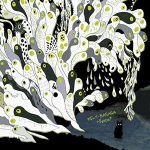 Melt-Banana, the Japanese self-described “melodic grindcore” band, has been scrambling listeners’ senses with great gusto for a number of years.  This time around the band is pared down to the core duo of founding members Yako and Agata, but the visceral impact is still the same – fast, loud, and fun.

Twelve tuneful noise montages build up, break down, and fly by at lightning speed, constructed of pummeling rhythmic drumming, fragments of metal guitar riffs from a fleet-fingered Agata, sonic FX, and lead shouter Yako’s nearly indecipherable, cheerfully demented exclamations.  There’s rarely a moment to breathe and the music doesn’t so much twist and turn as stop (on a dime) and go (like Road Runner).  Speaking of cartoon characters, Yako’s vocals sound like the aural equivalent to the visual explosion of artist Takashi Murakami’s colorful designs.  She’s emphatically hyper, vibrantly chirpy, and many a time, gleefully cutesy.

Because of all the swiftly shifting, extremely detailed sonic terrain, it’s difficult to tell when one song ends and another begins, and it’s very easy to play the disc and not realize it’s on its second spin!  Most of the agitated tracks contain a few cool “Wow!” moments, whether it’s the transient asteroid-blasting lasers and R2-D2-like freak-out on opener “Candy Gun”, the speed-prog-metal guitar arpeggios of “Infection Defective”, Yako’s fast-forward vocals at the end of “The Hive”, or the ephemeral (d)evolution of the blistering pace of “Lie Lied Lies” into an exhilarating, ‘swing-yer-pardner-‘round’ head-banging groove.