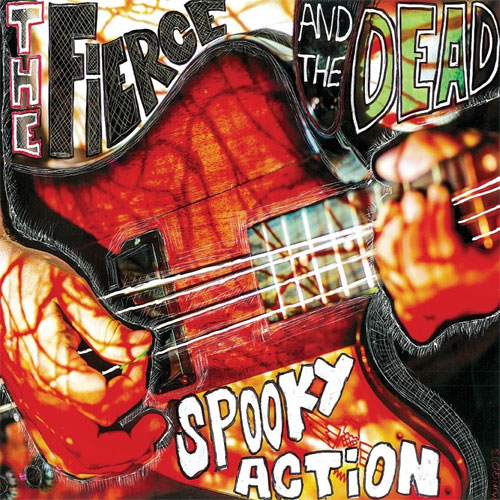 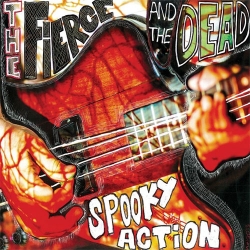 Guitarist Matt Stevens has risen quickly to the forefront of the English avant-garde prog scene. Having released several acclaimed instrumental albums, including Ghost and Echo, his “guitar orchestra” (as Acoustic Magazine UK called it) is delighting listeners more than ever. Outside of his solo work, Stevens is part of a stellar quartet called The Fierce and the Dead. They just released their sophomore LP, Spooky Action, and while it can feel a bit repetitious at times, it’s still an extremely exciting and impressive affair.

Joining Stevens in the group are Kevin Feazey (bass), Steve Cleaton (guitar), and Stuart Marshall (drums). Interestingly, the group was born out of “an improvised recording experiment that was initially intended for [Stevens’] second solo album, but it started to grow legs and arms and [evolve] into its own animal.” Previously the band released two EPs, as well as a full-length debut, If It Carries On Like This We Are Moving to Morecambe. They describe Spooky Action as “Songs about cults, quantum physics and absent friends.”

Opening track “Part 4” is the thematic successor to the Part 1 EP, as well as “Part 2” from If It Carries On… and “Part 3” from the VHS EP. This level of conceptual continuity is intriguing, as is the central guitar loops that permeate throughout the track, recalling Mike Oldfield and Robert Fripp equally. Once the rest of the band comes in, the anarchic spirit of At the Drive-In is palpable (although in a more compact form). It’s a distorted yet beautiful freak-out with clever modifications.

“Ark” is more introspective and nuanced, with atmospheric effects slipping in between notes and cymbal crashes. Halfway through, a conscious nod to the dynamic brilliance of vintage King Crimson is slipped in. “Let’s Start A Cult” is more eccentric and fun, with fuzzy tone and a wider spectrum of timbres, including horns. It’s as if Frank Zappa ventured into post-rock territory. The rhythmic prowess of Freazey and Marshall really shine through here, as their start/stop mechanic creates a focused frenzy.

Later on, “I Like It I’m Into It” mixes crushing riffs with spacey arpeggios with refined elegance; It’s grungy, complex, and affective. Separating the fierce halves (pun intended) is “Intermission 3,” which feels plucked from an early Agalloch record. It’s delayed changes and otherworldly character force listeners to get lost in its dream soundscape, which provides a nice break between sets.

The title track is among the most multifaceted offerings, as a brilliant pattern emerges from the chaos about a minute in. It has the touching freedom of a typical Devin Townsend transition. Afterward, the chaos resumes. “Entropy” also surprises with its use of strings; it’s subtle yet substantial, and the way the band builds upon them is appealing. Naturally, “Part 5” acts as a variation of “Part 4,” and it has more of an emphasis on counterpoint. Finally, closer “Chief” feels like the culmination of everything that preceded it: a plethora of ominous noise and heavy pitches arranged complexly over a surf rock foundation.

Spooky Action is a thoroughly thrilling experience provided you know what to expect. For all of its innovative layering and striking musicianship, there’s still a level of redundancy that may bother those who aren’t familiar with what The Fierce and the Dead does. Still, it’s easy to hear why Stevens is respected so much, as his blueprints are fairly unique. Of course, his bandmates are definitely up to snuff, and they do a fine job of composing with a shared mind (which is what all great bands do). If you’re a fan of this type of music, Spooky Action will surely satisfy.