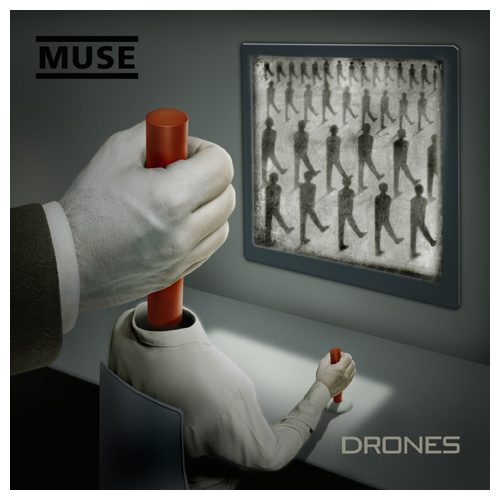 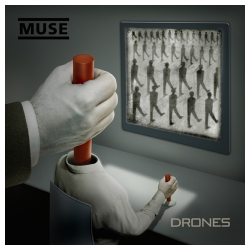 If you’re a fan of Muse, you’ll enjoy ‘Drones.’ It packs the same auditory awe (in all the same ways) that you’ve come to expect. Sadly, that’s essentially its greatest weakness, too; there’s nearly nothing here than demonstrates advancement or freshness.

When its fourth full-length, Black Holes and Revelations¸ arrived nearly a decade ago, English alternative/progressive rock trio Muse became an international superstar. Sure, the group’s prior releases contained some popular tracks that earned them acclaim, but with their 2006 opus, they truly evolved into stadium rock gods (after all, “Knights of Cydonia” is the perfect example of a breakout hit. It dominated radio and music television that year). Unfortunately, the bands subsequent efforts weren’t able to meld the same level of symphonic sleekness, irresistible melodies, varied experimentation, and engaging lyrics.  2009’s The Resistance, while perhaps being Muse’s most cohesive record, was less distinctive and diverse overall, while 2011’s The 2nd Law, in addition to other issues, simply emphasized too much electronica. It was a deviation for sure, but not entirely in the right ways.

Taking all of this into consideration, then, it makes sense that many devotees may have reserved expectations for the band’s latest collection, Drones. Fortunately, it exceeds them in some respects, as it’s a vast improvement over its predecessor in terms of concept, production, and arrangements (so there’s no need to worry about that). However, it follows their beloved templates so closely that it’s almost devoid of any thrills or innovation. In other words, Drones is the safest album Muse has ever made. While it definitely offers a return to form, it lacks a significant amount of memorable hooks or sonic punches to make it stand out in their discography. Whereas almost every track on their earliest records had a discrete identity, the songs on Drones culminate in an enjoyably commanding yet ultimately forgettable amalgam. It’s certainly grand as it plays, but there isn’t much left to remember in the aftermath.

“Dead Inside” begins the album with Bellamy’s trademark histrionic vocals, as well as bombastic trance beats and synthesized effects; it’s as if Freddie Mercury sang on the final two works by Pure Reason Revolution. Of course, his fuzzy guitar licks make an appearance too, and the arrangement incorporates more rock elements in general by the end. Lyrically, the track evokes the spirit of Queensrÿche’s revered Operation: Mindcrime, with Bellamy ardently decrying, “You’ve taught me to lie without a trace / And to kill with no remorse / On the outside I’m the greatest guy / But now I’m dead inside.” Like the majority of Drones, it showcases exactly what you’d expect of Muse, which makes it simultaneously serviceable and unsurprising.

Elsewhere, two intermissive clips, “[Drill Sergeant]” and “[JFK],” drive home the concept even more. The former continues in the next track, “Psycho,” and basically emulates the opening scene of Full Metal Jacket to insinuate the indoctrination of systematic allegiance. In contrast, the latter finds a man specifying about militaristic action over subtle orchestration and distorted guitar backlash. Both pieces are heavy-handed, yes, but they help add theatricality and weight to the concept overall, so they’re valuable nonetheless.

Going back to the music itself, “Mercy” finds Bellamy’s verse echoing the piano lead, while his pleas during the chorus include his token falsetto layer. It’s fairly straightforward, actually. Afterward, both “Reapers” and “The Handler” are frantic and luscious enough to satisfy any arena crowd. Later on, “Revolt” is highly accessible and slightly softer than one might expect, with a clear call to action in its lyrics: “You've got strength / You've got soul /You've felt pain / You've felt love / You can grow, You can grow, You can make this world what you want / You can revolt.”

Appropriately, “Aftermath” is a delicate ode with fragile singing and a nice blend of strings, guitar riffs, and focused percussion. It evolves as it goes, eventually integrating multiple vocal lines into the mix. “The Globalist” sneaks in next, with thunder and marching drums decorating Bellamy’s sustained guitar notes. To be honest, the first half of the track sounds a lot like “Invincible” from Black Holes and Revelations; halfway through, though, it picks up speed as a central riff launces the track into an apocalyptic frenzy before coming back down for a somber and luscious epilogue, complete with reflective harmonies. Although it’s affective and grandiose, it’s another strong example of how Drones plays it safe (Muse has had success with this model before, so they know that fans will enjoy it once again, plain and simple). Finally, the title track concludes the album with masterful a-cappella, as several vocal lines intersect into a stunning expression of closure and angst. There’s no denying how fitting it is.

If you’re a fan of Muse, you’ll enjoy Drones. It packs the same auditory awe (in all the same ways) that you’ve come to expect. Sadly, that’s essentially its greatest weakness, too; there’s nearly nothing here than demonstrates advancement or freshness. Likewise, much of the formula feels less intriguing than it did before, so there’s far less to get stuck in your brain. In terms of its production and performances, Drones continues Muse’s excellence; few modern bands achieve such supremacy and sophistication in the studio, but when the writing and level of experimentation aren’t up to snuff, it’s still not enough to equal prior benchmarks or even make a notable statement.