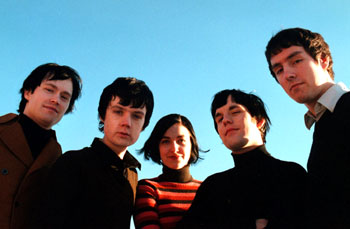 Show Review
Reviewed by Stephen Rafael
Dennis Lyxzen of the (International) Noise Conspiracy arrived at the El Rey Theatre with a simple, two-part plan. First, Lyxzen wanted the (I)NC to put on a great show - one that the audience would "feel in their minds, hearts, and feet." And second, Lyxzen hoped that after the (I)NC's performance, the crowd would join him in overthrowing the government…

Much cuter and way more subversive than our own Rage Against The Machine, Sweden's the (International) Noise Conspiracy uses pop music as a vehicle to promote political upheaval and drastic social revolution. However, unlike the rap and metal-edged Rage, the (I)NC drives its message home by combining retro-sixties soul music with a modern punk rock attitude. Onstage, the five members of the (I)NC appear to be equal parts Austin Powers and Noam Chomsky. The band wears matching Partridge Family-like, polyester flower-power costumes and performs in front of large banners that read "Are We Content with Slavery?" and "Power to the People."

All of this might come off as laughable if the (I)NC did not put on such an amazing live show. Singer Lyxzen tosses his tambourine and microphone high into the air while dropping to his knees or doing the splits. (Lyxzen also borrows some of Michael Jackson's Thriller-era dance steps, too.) Lead guitarist Lars Stromberg and out-of-control bassist Inge Johansson take synchronized, ten-foot jumps off of Ludwig Dahlberg's drum riser and the tops of their own amplifier stacks. And ice princess rhythm guitarist/organist Sara Almgren just coolly stands there, like she has seen it done better a million times before.

At the El Rey, the (I)NC performed familiar songs - "Survival Sickness," "Smash It Up" - as well as new ones such as a self-described "feminist anthem" called "Breakout 2001." The anarchy-minded Swedish band ended its set with another brand new tune, "A New Morning, Changing Weather," which climaxed when a man streaked naked across the stage and dove headfirst into the audience. Before exiting, though, Lyxzen directed fans to the (I)NC's extensive "merch" table. Here, the band sold compact discs, philosophy books, and a T-shirt with the catchy slogan "Capitalism Stole My Virginity" curiously stitched across the front of it.