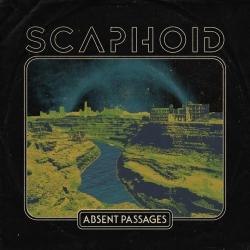 Absent Passages is both one of 2020’s finest progressive metal offerings and a demonstration of how exceptional a one-person project can be if they possess the autonomy, talent, and vision to fully realize their potential.

It’s not uncommon for up-and-coming bands to release some of the best music in their field. Whereas the most established acts may rely on tried-and-true formulas to appease fans and guarantee sales, fledgling bands arguably have more freedom to experiment. Such is the case with Absent Passages, the debut LP from Austin, TX prog-metal/post-rock project Scaphoid. The follow-up to 2016’s Dies Mercurii EP, Absent Passages would be a remarkable release for any collective, let alone the mind and mastery of just one person (Matt Hobart). Channeling bits of Agalloch, Animals as Leaders, TesseracT, An Endless Sporadic, and more, it’s an exceptional slice of instrumental progressive/folk metal that any fan of the genre(s) must hear ASAP.

Seeing as how the record was produced by Jamie King (Scale the Summit, Between the Buried and Me), it’s no surprise that the album sounds immaculate. As for its intentions, Hobart states that its aim is to provide “a sonically dexterous, focused, and fiercely independent sound that moves freely between aggression and atmosphere, from incendiary roar to infectious groove to intoxicating delicacy in a matter of moments.” Inspired by some of those aforementioned bands—as well as artists like Pink Floyd, Meshuggah, and Steven Wilson—Absent Passages is an ingeniously temperamental delight from beginning to end.

Opener “Marauder” excels at showcasing the sequences exquisite fusion of spacey varnishes, dull outbursts, and everything in-between. Atmospheric guitar arpeggios and piercing notes collide with blunt riffs, fiery solos, and malleable percussion, exemplifying a wide array of emotions without losing focus. Rather, it all coalesces beautifully, leading into one of the greatest instrumental prog/folk metal compositions I’ve ever heard: “Shores of Ruin.” That may sound hyperbolic, I know, but once you hear its awe-inspiring amalgamations of purposeful acoustic guitar fingerpicking, rustic strums, irregular rhythms, and pained plucking, you’ll likely agree. It evokes the best of early Opeth and In Flames as it continuously captivates, resulting in an arrangement that surpasses much of what Hobart’s more accomplished and able-bodied peers create.

Gratefully, the rest of the LP is just as fascinating and commendable. For instance, “None So Blind” is a bit more cosmic and epic, using starry shades and guttural confrontations to represent sorrow and catharsis. It’s wholly mesmerizing, providing a strong contrast for the comparatively grungier and impressionistic “Melpomene.” Later, “The Coldness of Clarity” is—as the title suggests—a bittersweet and wintery tune that makes great use of piano throughout, while closer “Infrastricken” sees Hobart fully embracing his djent side amidst drumming the conjures the expressive brilliance of Gavin Harrison. It’s not the most adventurous or multifaceted track, but its brutality is always gripping, and it definitely leaves you wanting more.

From start to finish, Absent Passages is a superb record. Not only does it stand as one of 2020’s finest progressive metal offerings—often eclipsing the output of the style’s most well-known purveyors—but it also demonstrates how exceptional a one-person project can be if they possess the autonomy, talent, and vision to fully realize their potential. I mean, it’s only Hobart’s first full-length collection, yet it instantly shows just how special his musicianship and creativity are. While he’d be a great addition to any progressive metal troupe, the fact that he can produce material like his all on his own (more or less) means that he doesn’t really need to be. He’s clearly doing just fine when left to his own devices, and I for one cannot wait to hear what he does next.