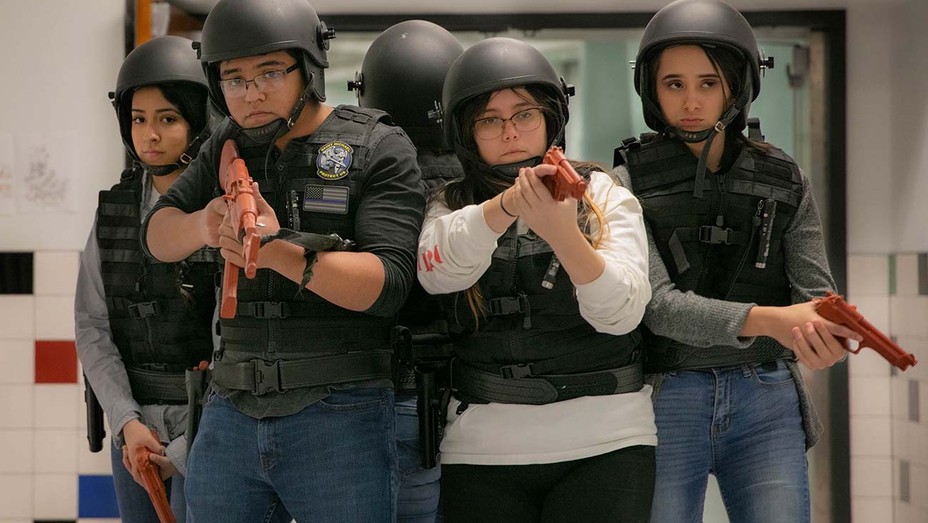 With more than 900 law enforcement classes offered across the state of Texas, students at Horizon High School in El Paso register for these spots to earn a living after graduating to forge careers in the criminal justice system. Texas-raised director Maisie Crow’s documentary At the Ready portrays intimate insights into the lives of three students grappling with their eventual future and unraveling identity while asking pertinent questions our nation faces regarding the intersections of immigration laws and politics.

Known for its high population of immigrants and its location close the U.S. and Mexican border, El Paso’s unique position calls for its enormous rate of classes offered in high school that teach its students mock-up drug raids and active shooter busts as a straightforward and seemingly reflexive path towards a career in law enforcement. Reiterating how much one’s income can double and triple over a span of just a few years and how positions in the field are continually needed, the courses drill a sense of urgency and certainty into students’ heads that finding this type of work is an automatic solution if you’re looking for steady income after graduating as a means of supporting yourself and your family. Focusing on the lives of Cristina, Cesar, and Mason (who has since transitioned and is known throughout the film as Kassy), Crow lends a vulnerability to her subjects as they juggle the grueling aspects of the class with their life at home.

Mason, chosen as the club’s commander and ringleader for the year, is often alone at home with an absent truck driver father and finds it difficult to open up about his feelings while putting an enormous amount of pressure on himself to succeed. Cesar finds himself in the place of a caretaker, serving as a role model his younger brother as his mother works to pay the bills and is often separated from his father who lives in Juarez, Mexico after a prior drug bust led to his deportation from the United States. Meanwhile Cristina’s adamant attitude about her potential career falls in line with her father’s, who encourages her to follow what he deems as The American Dream. Yet the viewers come to see that their actions and attitudes often clash and contrast with one another as they more fully enter into self-discovery and each has their own very personal experiences and responses towards militant patrol at the border.

As they near closer to graduation, attended political rallies and the incessant news headlines of the Trump administration add a sense of cognitive dissonance as they prepare for training in bullet-proof vests and fake guns throughout Horizon High School’s hallways. Questioning the fraught dehumanization of immigrants and stories of minors that are forcefully separated from their family, the students’ reliance on a supple salary and steadfast job begin to waver. It’s clear to see that their instructors and classmates serve as a family outside of their homes, a collective of respectful figures to look up to when oftentimes their familial structure outside the classroom falls apart. Yet they too question if their students realize what’s in store for their potential future, knowing PTSD and racist criticism are topics that cannot be avoided. While there are no simple conclusions, Crow’s film opens up the dialogue for us to explore and contemplate these intricate issues that continue to divide our nation apart.