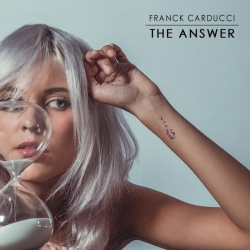 The Answer is another great record from Carducci, as it finds him further refining his artistic identity to ensure that fans are given superlative songwriting and scores from start to finish.

On his first two LPs—Oddity and Torn Apart—French progressive rock maestro Franck Carducci proved to be a master of channeling classic stylstiic creators within satisfyingly original spheres. Full of dramatic yet welcoming songwriting and vibrantly sophisticated arrangements, the records solidified Carducci as one of the most worthwhile modern creators in the field. Happily, he now returns with arguably his best effort yet, The Answer. Highly focused, compelling, and memorable, it’s another stellar sequence that every genre fan needs to hear.

Carducci openly cites Pink Floyd, Supertramp, The Beatles, Genesis, and Led Zeppelin as precise influences on The Answer, and he’s spot on in recognizing how each of those bands’ specialties are embedded in his work.  Helping him bring those sounds to life are Christophe Obadia (electric guitar, didgeridoo, bass-pedal), Nino Reina (drums, backing vocals), Mary Reynaud (Theremin, tambourine, rainstick, vocals), and Olivier Castan (keyboards); furthermore, keyboardist Derek Sherinian (ex-Dream Theater, Sons of Apollo) also plays a part. Together, they make The Answer an instantly captivating collection that you’ll no doubt want to revisit time and time again.

Opener “(Love Is) The Answer”—which also reappears later as a “radio cut” extra—is clearly among the catchiest and most uplifting tunes Carducci and company ever cut. Its arid spaciness specifically channels Gilmour-era Pink Floyd, with angelic choral chants further supporting his core acoustic guitar chords, keyboard and rhythmic accentuations, and urgently empathetic voice and melodies. The tranquil yet busy instrumental break halfway through is fittingly retro yet also idiosyncratic, balancing tried-and-true prog rock aesthetics with a slight arena rock edge. Clearly, it’s a damn fine way to start, and a choice example of what makes Carducci stand out as his own artist.

From there, The Answer continues to impress.  For instance, “Slave to Rock ‘n’ Roll” evokes classic ELO in that it hides its deceptively detailed instrumentation beneath in-your-face sing-along catchiness. As always, the male-female vocal harmonies are idyllic, with a dense chorus complemented by crunchy guitar riffs and reserved yet fitting percussion that keep you glued. (The back-and-forth guitar solos even carry an air of blues rock punchiness.) Afterward, “Superstar” is wonderfully fanciful, go-getting, and inviting—e.g., The Flower Kings or Phideaux—with a colorful central keyboard motif that’s wholly absorbing. It’s also fairly varied, moving through several cohesive yet individualized phases across its twelve-and-a-half minutes. Without a doubt, it’s a highlight of Carducci’s whole catalog.

Naturally, the latter half of the LP is also superb. “The After Effect” is perhaps the most theatrically gripping and poignant of them all, with odd rhythms, chaotic keyboard wizardry, and panicked singing building plenty of tension during the verses; next, the cryptic chorus carries you into the unknown before more intense instrumentation takes over. In contrast, “The Game of Life” is a powerful piano ballad (with horn accompaniment) that offers relief from the flashy madness that surrounds it. As for closer “Asylum,” it reprises the majorly hard edge, quick pace, and intricate appeal of The Answer; yet, there’s also the poppy compactness of the aforementioned Supertramp for good measure. Obviously, Sherinian adds a lot of flair as well, elevating an already grand finale to new heights. (Two other bonus songs—“On the Road to Nowhere” and “Beautiful Night”—take a simpler folk rock and soft rock trajectory, respectively, that definitely work within the context of the sequence.)

All in all, The Answer is another great record from the Carducci camp. Rather than reinvent his artistic identity, Carducci further refines it to ensure that fans are given superlative songwriting and scores from start to finish. As such, he expertly balances moments of virtuosic flamboyance with scaled-down arrangements that heighten, rather than supersede, the heartfelt melodies and lyrics in the spotlight. If you’re already a fan of his, you’ll no doubt cherish this one as much as its predecessors; if you’re not but are in the mood for top-notch progressive rock in every sense, well, you now have the answer.