The Neal Morse Band - The Similitude of a Dream 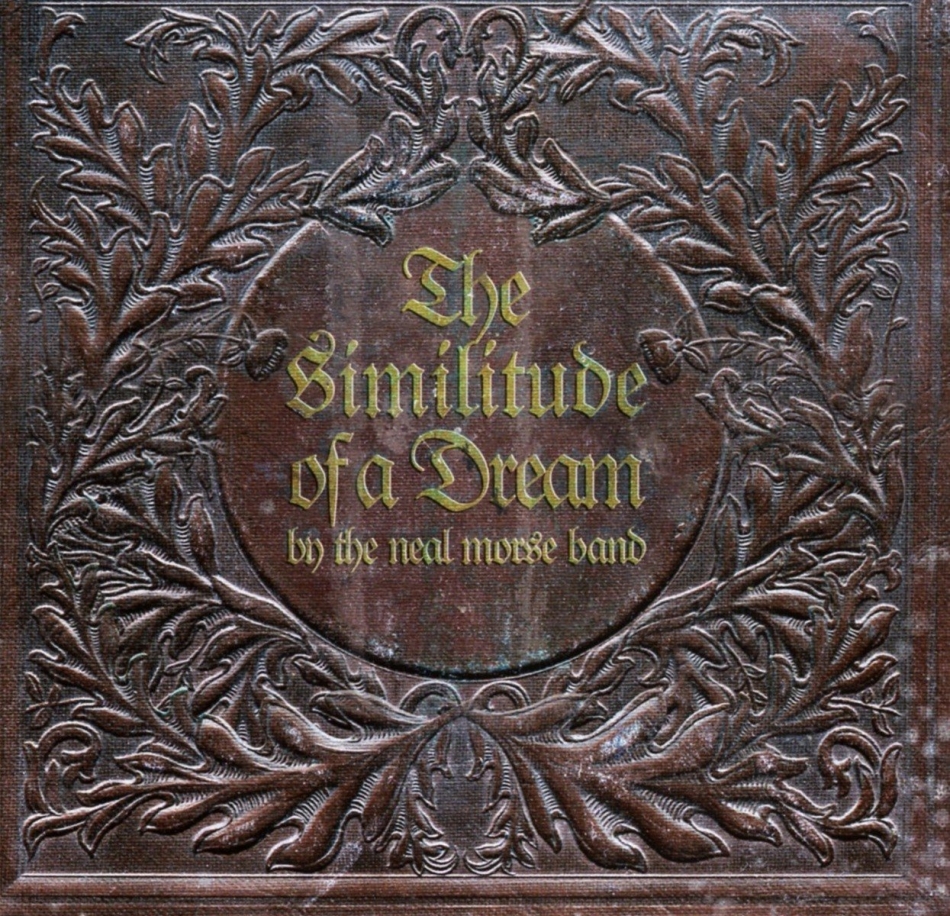 'The Similitude of a Dream' cover 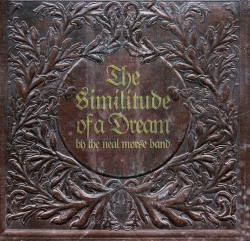 The Similitude of a Dream represents the best and worst of Morse, as his greatest assets have become his greatest defects, too. Overall, though, it’s another incredible album in his catalog.

It would be very easy to dismiss and mock The Similitude of a Dream, the second studio LP by The Neal Morse Band. After all, drummer Mike Portnoy boasts that it ranks alongside not only some of his prior masterpieces (like Transatlantic’s The Whirlwind and Dream Theater’s Metropolis Pt. II: Scenes from a Memory), but also more ubiquitously iconic and influential gems like The Who’s Tommy and Pink Floyd’s The Wall. Furthermore—and to be blunt—the sequence packs many Morse clichés (both narratively and musically), so it feels extremely familiar at times. That said, simply dismissing The Similitude of a Dream for its initial predictability is unfair because it’s ultimately another exceptional work in Morse’s outstanding catalog. Fundamentally, it maintains all the overt elements that make him such a singular songwriter and composer, so while he’s certainly done a lot of this before (and better, on Snow and Testimony 2, among other efforts), his detectible formula still works well enough to make The Similitude of a Dream a great journey overall.

It’s no secret that Morse’s canon overflows with religious symbolism and storytelling, and The Similitude of a Dream is no different. As he specifies:

[It’s] loosely and sometimes directly based on the book Pilgrim’s Progress by John Bunyan. The original title was The Pilgrim’s Progress from This World to The That Which Is to Come; Delivered Under the Similitude of a Dream, and it was originally published in 1678. The book chronicles the spiritual journey of a man from the City of Destruction to a place of deliverance. Someone had suggested to me that I do a concept album based on this book, but I kind of forgot about it. Then when I began writing new songs last December, the suggestion came to my mind. I had never read the book, so I Googled the SparkNotes story outline and began to write some little song bits and instrumentals based on what I had read. Those bits combined with the ideas that the other guys brought to the table then miraculously exploded into this double concept album.

In this way, the record is yet another tale of a man (a) losing his way/faith, (b) battling his inner demons and facing oppression/uncertainty, and (c) eventually finding his way/faith again (and celebrating with a grandiose reprise at the end, you know, to bring things full circle). As repetitive as that may make The Similitude of a Dream sound, though, it’s likely because of these thematic beats that Morse’s melodies and surrounding arrangements are always so inspiring, ambitious, and engrossing. You know you’ve heard it before, but you also can’t deny that you’re singing and playing along, as well as marveling at all the conceptual continuity scattered around (of which there is plenty, making it a true progressive rock opus).

Mournful strings introduce “Long Day,” which opens the first disc on an appropriately disheartened note, with Morse’s trademark defeated grace uttering laments about being “a stranger” whose soul is haunted and whose “life is a shadow.” Right away, it’s clear that the LP will travel an accustomed road narratively, yet the blend of strings, vocals, and delicate acoustic guitar strums is nonetheless tastefully touching and enveloping. Of course, it segues impeccably into “Overture,” which is your normal Morse slice of bombastic intricacy and tuneful elegance. As you’d expect, it features his token start/stop rhythmic trope, as well as his typical dizzying note patterns, but it’s still masterfully written and performed, and it becomes even more impressive and treasurable once you internalize the rest of the full-length and catch all the nods to future moments. (Are you starting to see a trend here in terms of pros and cons?)

Afterward, “The Dream” evokes Testimony 2’s “Jayda” in its melodies and guitar arpeggios, while “City of Destruction” represents what Morse arguably does best: tumultuous, dense, and overwhelmingly catchy antagonism. To be fair, it also recalls past material (such as “The Truth Will Set You Free”), but it’s still an awesome beast with killer layers and guitarwork, both of which showcase how much Eric Gillette brings to the table. There’s also a slightly playful section at the end that harkens back to Morse’s run with Spock’s Beard. Likewise, “We Have Got to Go” serves as a showpiece for vocalist/keyboardist Bill Hubauer, whose perpetual lead is magnificent (even if it sounds like it’s about to go into “Mercy Street” at times), and the poppy “Makes No Sense” makes great use of his distinguishing vocal timbre. The communal vibe continues on “Draw the Line,” a relatively bluesy rocker led by Portnoy, who’s easily the weakest singer of the bunch (he’d agree, I’m sure), yet he still adds a very listenable and vivacious shade, making him stand out all the same. (The latter harmonies are among the most serene on the whole record, too.)

“The Slough” is another lavish instrumental, while “Back to the City” is a wonderfully triumphant, if slightly cheesy in its overzealousness, aural party with some of truly vibrant tones and infectious dynamics (including rich pianowork and spurts of lovely acoustic guitar ballad). Perhaps the standout of The Similitude of a Dream, “The Ways of a Fool” is a quirky and imaginative tour-de-force that engulfs Hubauer’s lead in Beatles-esque harmonies and colors, as well as Morse’s trademark vocal rows (which, to be fair, is a genre standard). Actually, it’s a fairly atypical track, having as much in common with bands like Bigelf, The Flower Kings, Gentle Giant, and even The Beach Boys as it does with Morse’s solo styles. The penultimate “So Far Gone” is a cheerful and virtuosic ode with an abundance of references to what preceded it (which will surely make you smile), while disc closer “Breath of Angels” is the perfunctory end-of-part-one cliffhanger (think: “Wind at my Back”) that demonstrates Morse’s gospel side; it’s effective in that sense, but it’s not especially engaging, and it may deter listeners who don’t want so much explicit piousness in their prog extravagance.

The second half of the story begins with “Slave to Your Mind,” a complex composition spearheaded by tricky rhythms, flashy keyboard routes, and a highly hypnotic chorus. In contrast, “Shortcut to Salvation” is a warm and upbeat singsong that—as its name suggests—is fittingly welcoming and life-affirming, with a standout saxophone solo giving it even more charm. Gillette also surprises near the end with an impassioned reprise of a previous passage, which juxtaposes the main melody very well and further cements how well The Similitude of a Dream flows like a singular epic. Next, “The Man in the Iron Cage” mixes the enthusiastic buoyancy of “The Grand Experiment” with a defined ‘70s hard rock vibe; like “Back to the City,” it counters its intense flashes with bits of singer/songwriter humility (during which Morse alludes to both past and future ideas).

Likely the best transition comes when “The Road Called Home” emerges with alluring percussion, bass lines, guitar riffs, synths, and most of all, perpetual horns that are wonderfully comforting and peculiar. As a result, it’s probably the best representation on the record of what makes a Morse instrumental (or, in this case, mostly instrumental, as the closing part features vocals that are very stirring) so distinctive. It leads into “Sloth”—whose high harmonies and bittersweet instrumentation are sublime, as is Gillette’s sudden echo of “Long Day”—musically and lyrically before “Freedom Song,” like “Shortcut to Salvation,” offers listeners some folk-rock splendor (complete with banjo) that’ll encourage even the most non-religious of the flock.

Unfortunately, “I’m Running” is the weakest entry in the entire collection for several reasons: it’s trite lyrically, it sounds too much like “Chance of a Lifetime,” and it’s also a bit too simple and commercial to really appeal. It’s certainly not a bad track; it’s just subpar compared to everything around it. Thankfully, “The Mask” storms in next and completely blows you away. Following its initial pianowork (which is lusciously classical), Morse’s ominous verses sneak over chilling piano note counterpoints that are incredibly suspenseful. Even better, each return brings more intensity, until a final explosion of evil percussion and synthesized tones battle alongside Morse’s grungy uncertainties.

The tale starts to wind down with “Confrontation,” an expectedly chaotic, exciting, and catchy assault that continues the conceptual continuity is awesome ways, shifting gears at pivotal moments to ensure the most enthrallment possible; also, Hubauer returns to counter Morse, and the way his voice rises as he sings, “You are a poor excuse / And not a favored son” is amazing. “The Battle” ensues and is an especially frisky yet frenzied instrumental that, like most of the record, is undoubtedly familiar but still breathtaking. It also provides an aptly hazardous finale to the central conflict, from which the last piece, “Broken Sky / Long Day (Reprise),” arises with beautiful spiritual radiance and Morse’s token sense of completeness. Obviously, he usually ends his albums like this (for example, Testimony 2’s “Crossing Over/Mercy Street Reprise” and Snow’s “Made Alive Again/Wind at My Back,” as well as the bookended “The Temple of the Living God” and “The Land of Beginning Again” on ? and Testimony, respectively). That said, he’s still really good at it, so fans who expect and enjoy his typical fanfare conclusions will no doubt feel fulfilled by this one, too.

If it were released by just about any other modern progressive rock artist, The Similitude of a Dream would probably rank as their crowning achievement. After all, it’s an extremely striving, impactful, and expansive production bursting with ingenious self-references, captivating melodies, and thrilling and dynamic instrumentation. However, the fact that it’s another Neal Morse effort proves to be its biggest flaw, as what would be so original and unexpected under someone else’s direction becomes derivative and predictable because it resembles so closely what he’s done so many times before. Because of that, it automatically loses some of its luster, as it doesn’t surpass (or even equal, to be honest) any of the aforementioned associated records. To put it simply, The Similitude of a Dream represents the best and worst of Morse, as his greatest assets have become his greatest defects, too, so while his formula is still quite strong, he’s perfected it elsewhere, meaning that it may finally be time to try something significantly new.